April 26, 2010
Squaw Valley Could Exceed 150" in less than 30 days of Late March and April!
You can literally read my last post which was last week and expect almost the same exact weather this week. It is truly amazing. The only difference is this storm is larger and it will be even colder. The models are in agreement that starting tomorrow morning the snows will begin in the Sierra and they should last through Wednesday when the cold front comes through and pulls in the real cold stuff. This is more of a Tahoe event than a Mammoth event. Some areas along the west short of Tahoe could pick up 4 inches of liquid precip. That could translate into 3-5 feet of snow.

Our temperatures will begin to recover around next Saturday where there are some indications that we could see some stable weather with high pressure building in. That could last around a week and could bring us some 80's before the next series of storms arrives around the 10th of May. 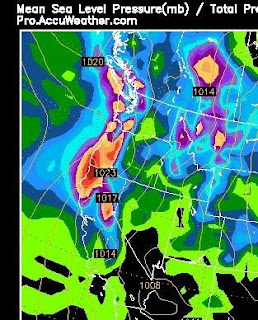 Man Made Global Warming Statement
I have to say this: Back in late March I was listening to the radio. A very liberal, local broadcaster was preaching the warnings of man made climate change. He used as evidence what he called below "normal" precip this year for the Sierra. Normal is a word used by amateurs. There is nothing normal about weather. All we know is that measuring weather over many decades we can produce an "average". That average is absolutely no indication of what will happen at any given time. This broadcaster sited some climate research center that said the snow-pack is below "normal" (that pesky word again). He then, like all good liberal broadcasters, stated that he did not expect any more major storms for the Sierra and predicted a water shortage this summer. I could only laugh and wonder if he read any of my posts last summer into this fall which talked about a very stormy spring? Apparently he had not. Since I heard this "expert" commentary, Squaw Valley has reported 126 inches of snow. They received it in less than 30 days and will significantly add to that total over the next several days. Add to that a major volcanic eruption in Iceland and you get the idea that these "man made" global warming alarmists are frauds. Think of the 100's of billions we are throwing away on this fraudulent science. If that doesn't make you steamed (pardon the pun), it should!

In the coming months I will let you know in very simple terminology why considering man-made climate change is nothing short of complete arrogance.