November 23, 2010
I will rarely post current conditions, but the following map shows what is going on now and what we can expect for this weekend: 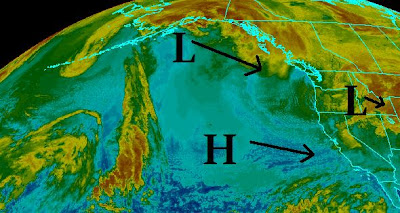 Right Now
Currently there is a very deep low pressure system moving inland through the state of Oregon. This low is going to cause havoc through the central and northern Rockie Mountains with blizzard warnings posted for Salt Lake City and many other areas of Idaho, Utah and Montana. Behind the front is a short wave of precipitation with very cold air. That has already begun to dump very heavy snow in the Sierra and will spill over and cause near white out conditions in Reno, especially west of 395. Be aware, this should occur around 9-11am, so you may want to be off the roads!

Thursday and Friday
The high pressure system off the California coast will be in control and bring rapidly clearing skies. However, the cold air will be trapped in the valley and this will result in deep temperature inversions. Expect the higher elevations to be much warmer as the cold air will not be blown out until the weekend. As the Arctic front comes into the area, there will still be some residual winds. That means it probably will not be as cold as I was thinking. However, the lowest parts of the valley will probably see some below zero readings on Wednesday and Thursday mornings.  These will be the coldest mornings for this time of year, in the last 50 years.

This Weekend
Up in the Gulf of Alaska is another strong low pressure system that is going to tap into some Pacific moisture and move down the coast, split and hit us on Saturday night into Sunday. The NWS calls this a decent storm and the models are in agreement that the Sierra will get another dose of moderate to heavy snow. Here is a look at the approaching storm on Saturday morning: 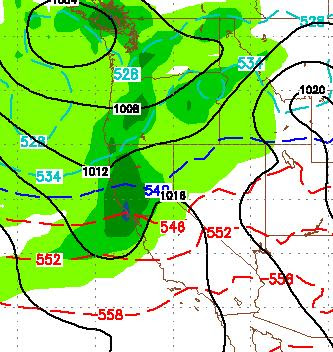 This is a much smaller storm than last weekend, but could leave behind 1-2 feet of fresh snow by Sunday morning. Right now, travel looks fair for the Sunday afternoon travelers returning home after Thanksgiving weekend.
How About After This Weekend?
The models are not in agreement, but EC says another storm is heading our way for early next week. I will keep an eye on this one. Here is EC's best guess for Monday afternoon: 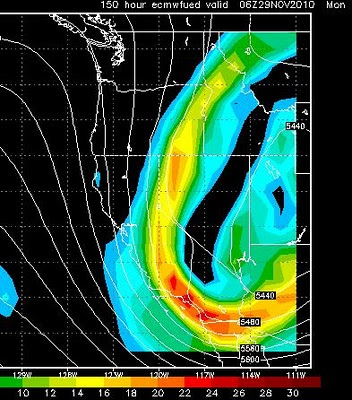 The GFS weather model is not currently in agreement with this forecast. However, EC got next weekends storm right and it took GFS a while to come around.


Unstable Snowpack
I took this from the Sierra Avalanche Center:

Near and above treeline on slopes steeper than 35 degrees, CONSIDERABLE avalanche danger exists on N-NE-E aspects with pockets of CONSIDERABLE danger on the NW and SE aspects. On all other aspects above treeline and on all aspects below treeline, the avalanche danger is MODERATE. The most likely time for natural avalanches and easily human-triggered avalanches will be during the period of intense snowfall and strong winds forecasted to occur through midday today.

As predicted, it is very dangerous out there, use your head if going into the backcoutnry. For the full report, click the following link: Sierra Avalanche Center Advisory  .

Where Does the Storm Go When It Leaves Us?
The most recent storm is going to cause havoc across the entire northern section of the country. Travel will be risky in the Northeast thanks to the large storm that pummeled us to the tune of 5-8 feet of snow in most areas of the Sierra. Here is a look at the NE USA on Saturday, should be quite a mess: 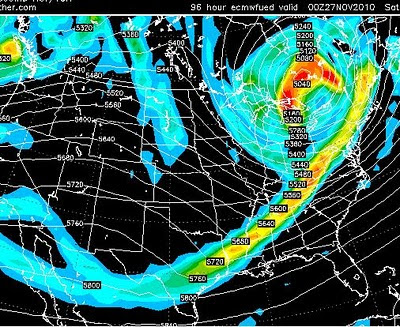 This has been a very eventful November and looks to stay that way for some time.