December 15, 2011
As I wrote in my last post, high pressure has been blocking anything from getting down to our area. However that ridge is showing signs of weakening and because of that it is being shoved south and west. This is allowing small storms to come down the coast and have at least a minor impact on Tahoe. Moving forward, these storms will gradually pick up in intensity. It looks like the first big storm of the season will arrive here sometime between Christmas and New Years. Both the EC and GFS long range models are showing signs of enhanced storm intensity. These storms are also moving much further south.

EC has a small system coming our way in a little over a week. (Figure 1)


Notice how this storm is still off the coast as it heads south. This is much more typical of an El Nino year than a La Nina year. Pretty much means you can throw the Nino/Ninas out the window this year.

A series of larger storms start to make their way into our area starting around the 28th. This is no guarantee, as these storms could still be pushed north of us. My gut feeling is we will see a decent weather event between the 28th and 31st. Here are a couple of forecasts by the GFS long range model for late December: 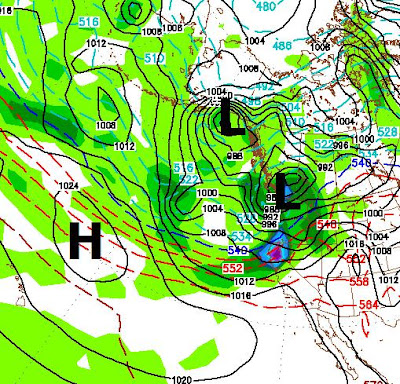 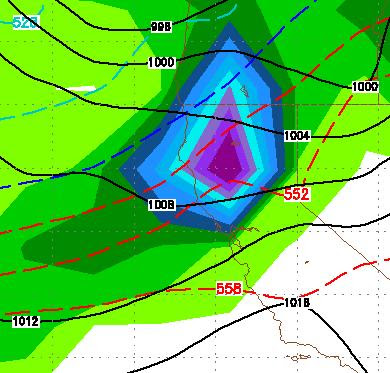 Two big differences between this pattern and what we have been seeing. First, the ridge of High Pressure has been shoved significantly south and west. Second, we now have moisture tap for these storms. If this event holds true to form, we could be looking at anywhere from 3-6 feet of snow, which will obviously make a lot more terrain accessible. Again, this is a long way off, but the pattern does appear to be changing as I talked about in my last post.

One other factor worth mentioning. The entire country is starved for snow with the exception of a few places in the Rocky Mountains. This is mostly due to Arctic air being bottled up. Most of the country is experiencing very mild temperatures. Without the Arctic air to cause havoc in the Gulf of Alaska, the storm machine is missing much of its ammo to fire up big storms. There are signs that the cork could be popping on that arctic air soon. When that happens we will start to see much larger storms in our area.