May 25, 2012
After nearly 2 months of stable weather, a strong storm for this time of year, has moved into our area and is bringing some very welcome precipitation. Back in the beginning of April, our La Nina conditions died and moved into ENSO-neutral conditions. That brought on our very stable weather until this storm. Does this mean another weather pattern change could be upon us? In a word no. Our weather will quickly recover and become stable again gradually getting warmer as summer approaches. I believe this summer will bring above average temperatures. We cannot have below average precip because we average nearly no precip in the months of June, July and August combined.

Many of the weather models have our ENSO-neutral (ENSO = El Nino Southern Oscillation) conditions possibly transitioning into El Nino by the September, October time frame. Why does this matter? Simple, El Nino will almost certainly bring us above average precip for the winter of 2012/2013. After going below normal for 2011/2012, that will be a welcome relief. Of course the activity of the sun could have a lot to say about that. Unusual solar activity was recorded which brought above normal temperatures to almost the entire northern hemisphere. November and December word unheard of across the USA ... never been recorded.

As far as El Nino, models are predicting an equal chance for Neutral ENSO and increasing chance of El Nino moving forward through the winter of 2013/2014. If all goes according to plan, I believe we will start to notice a pretty good pattern change come mid to late September. Here is something to chew on for the summer, this chart is from IRI and shows the ENSO forecast. I will keep an eye on this and report as conditions warrant. For now, enjoy your summer and think snow for next winter. 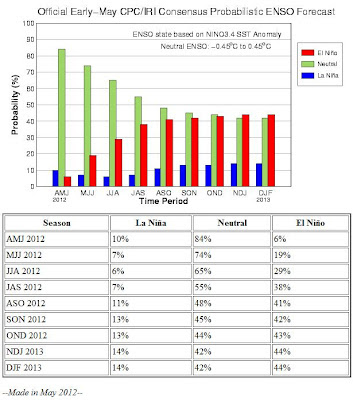