When Will El Nino Begin to Effect Our Weather?

November 10, 2015
Contrary to popular belief, El Nino has had only a minor role in our most recent storms. These have been relatively small storms that found a moisture tap to the west and south. However, that is not what defines an El Nino influenced event. El Nino will take hold when the southern jet starts to influence our weather. That has yet to happen, so these storms are a real blessing.

I receive a lot of very astute observations from some very smart people. One of the more interesting observations that I have seen came from BigSurHuntington. After looking at the last few strong El Nino years, he believes a pattern emerges. That pattern shows a break in the storm cycle while the southern "El Nino" jet stream moves up to influence our weather. After this break is when the heavy rains start. Because this jet is traditionally much further south, as it moves up, it brings copious amounts of moisture to the entire state of California. We are nowhere near there ... yet.

To show you the pattern to look for, check this out (This pattern does seem to be prevalent during these strong El Nino years). First notice how heavy rains begin around the middle of November and last until around the middle of December or early January. This is the El Nino of 97/98. Green represents the rainy pattern, while the red represents the transition period where the southern jet begins to influence our weather:

Notice the break in the cycle around the middle of December. After that, heavy rains followed and did let up for over 4 months.

Two More Storms Heading Our Way
I am tracking a couple of storms that are headed our way for the weekend and early next week. First we will dry out for a few days and then the cycle will pick up again. Notice the pattern that traditionally starts around the middle of November.

The first storm arrives Sunday afternoon. It should get a decent moisture tap but remain relatively cold (first guess: 7,000 foot snow levels). Here is a look: 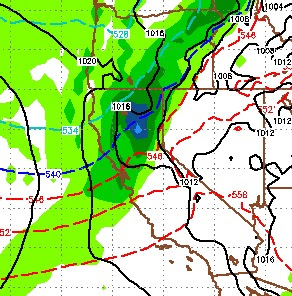 The next storm should arrive almost immediately after the first storm has exited. It seems more promising. This is forecast for late on Tuesday: Are we seeing a familiar pattern emerge? Can we guesstimate what our weather will be like starting around the beginning to the middle of January?