No End in Sight For Storm Train; Warmer, Wetter Storms Come in next Week

January 15, 2016
Everybody said we were crazy with our 18-36 storm total for the Carson Range; but we were pretty darn close as it turns out. That was a great 1-2 punch and the snow is starting to pile up.

There is no end in sight for the storm train as we are tracking storms for early tomorrow, Sunday-Tuesday, and late next Friday. The later two storms are showing much more liquid precip. However, these will be warmer storms and snow levels will rise to around Lake Level. Because of the amount of warm moisture these storms are bringing in, I would not be surprised if snow levels started in the 7,000 foot range. But, let's no get ahead of ourselves.

We already have another storm knocking on our door and it will arrive in Tahoe very late tonight through tomorrow. Here is a look at the forecast for around noon tomorrow. This is a weaker storm but is cutting a nice path for the storm on Sunday: 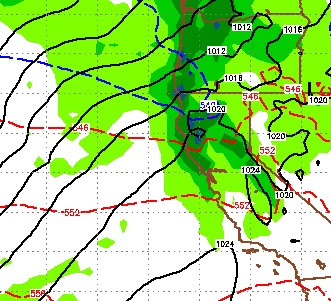 I expect the lifts at Mt. Rose to stay open tomorrow. However, this storm will bring only around 3-6 inches of snow for the Carson Range and about double that for the Sierra.

Then, starting Sunday afternoon a much larger system moves in. The system will be packing some high winds and warmer air. Again the snow levels I think will be above lake level to start and move down as the storm moves through. If you live around the lake, expect heavy, wet even slushy snow. However, it is a different story for the higher elevations. I expect this storm to leave 3 feet of snow in the Sierra and about 1-2 feet in the Carson Range. Here is a look at the forecast for around midnight on Sunday: 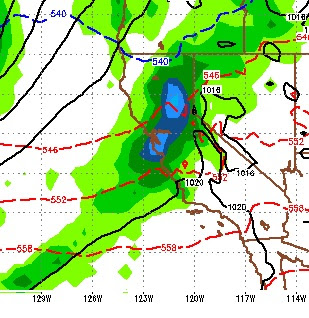 Notice the moisture tail from this storm. This could produce atmospheric river like conditions. This storm is the toughest to predict because the ample moisture available and the variable temperatures associated with that moisture. After a few days to dry out, next Friday will usher in another storm. Here is a look at the forecast for Friday evening: 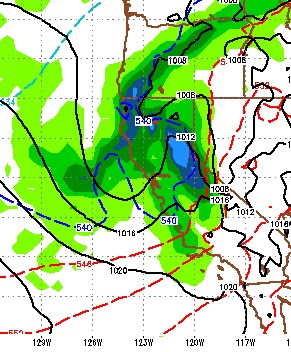 This is another larger storm system with an adequate moisture tap. Notice the warm air mixing from the south. This is not a classic El Nino storm, but is certainly influenced by El Nino. In fact, we have not yet moved into a complete El Nino pattern yet, when we do ... lookout.

Finally here is the moisture outlook for the next week. 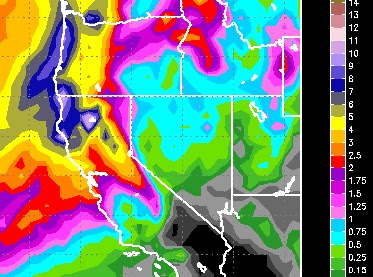 Because these are warmer storms the snow amounts may not be as impressive. But as far as liquid precip, the Northwestern Crest of the Sierra could pick up an additional 8-10 inches. The Carson range will see some shadowing but we should join the party in the 3-5 inch range depending on elevation.