April 06, 2016
Winter is going to make a comeback over the next 7-12 days at least. A small storm is coming in from the south and will actually deliver some much needed rainfall for Southern California. Although, I do not see a major rain event, they will take what they can get. That southern storm will work its way north into the Tahoe area and produce rain and upper elevation snow.

Then, a larger storm will drop down out of the north and remind you of January around the middle of next week. This storm will bring beneficial rains to Northern California and snow to the Western Crest of the Sierra. Interestingly enough, the models are not in agreement here. The GFS is more bullish on both storms producing precip for California. The EC is has lighter amounts and later timing, but believes the Carson Range and the leeward valleys will join in on the party. I usually side with the EC as it has been the more reliable model.

Let's start with the GFS for late on Friday: 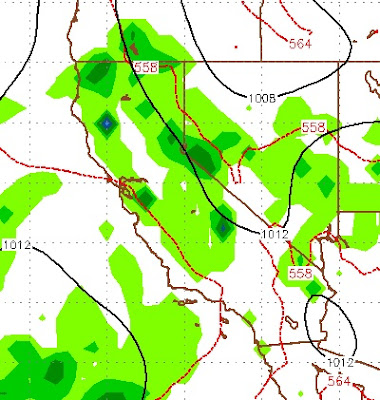 This storm is centered off the coast of Southern California. It will pull very warm air into our area for tomorrow. After tomorrow, our nice run of weather ends abruptly and will not return for the foreseeable future as our Southern storm will be joined by a larger, Northern storm. Here is a look at the very active weather pattern heading our way:

I believe the Carson range will pick up additional snow, although in the 3-6 range (above 8,000 feet) through the weekend. Next week is a different story. If things break our way, we could be looking at a very cold storm to bring in some very light powder around next Wednesday.

Our top weather analyst, Paul H., has been looking at the long range patterns. Paul has a real talent in seeing things well before other forecasters and we are very happy to have him. We called for a dry February and wet March based on Paul's analysis. Here are his observations for April:

This could be an April for the history books! After the weekend storm, mid next week looking like a couple nice cold lows might sneak in and give Tahoe one last blast of Winter weather!! This is very exciting stuff and interesting fact is we might get more rain this April than 2014 and 2015 Jan Feb and March combined or six months of when we get most of our precipitation!! Crazy stuff!!

We are not done yet.