June 10, 2016
A couple of unusually strong storms are headed for the Sierra that will bring upper elevation snow, high winds and cooler temperatures.

The first storm will come in late Sunday afternoon. Storms this time of year do not pack much moisture. I doubt any moisture associated with Sunday's storm will make it over the Carson range. But the cold air and wind certainly will.

Here is a 500mb look at the Pacific ocean. 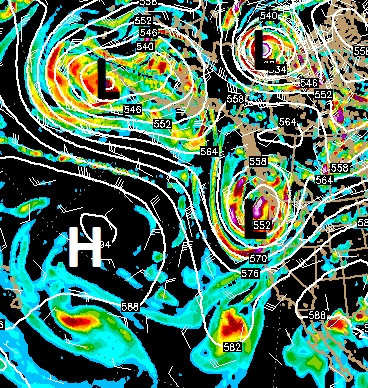 First thing to notice, our ridge of high pressure has been pushed out to sea again. Second thing to notice, the storm track is very active, with storms somewhat stacked up. If this were late December, it would be quite impressive. Again, I do not see copious amounts of precip, but I do see much cooler and more windy weather for Tahoe and the Sierra through at least next Saturday (and Reno/Carson too).

What is happening is the North Atlantic Oscillation is locked in negative phase which means the Azores high is extremely abnormally weak for this time of year and the butterfly effect is keeping the jet stream or North America pattern in positive phase. This means the jet stream is finding an equilibrium at a low el nino type angular trajectory and is being fueled by high humidity and cloud development over east asia. Moreover with the north pacific decadel in warm phase (Northeast pacific basin sea surface temperatures are above normal) it is energizing the large upper level lows that are slowly drifting east across the north pacific ocean and rotating over the West coast every five days or so. Another interesting teleconnective pattern is the Antarctic Oscillation and the positive phase that is becoming more common as our earth warms! The positive phase controls the lows from detracting from the polar vortex and dropping down into the lower latitudes and during the last thirty years is becoming more of the norm and thus keeps a zonal jet stream that hugs the ice shelf. What does this have to do with California weather patterns one might ask? To be honest no one knows but could mean more active wet summers for us??  Bottom line is negative phase North Atlantic Oscillation+positive phase North Pacific decadel oscillation+active equatorial thunderstorms or hyperactive ITCZ+ high global specific humidity levels (result of two el nino years)= large upper levels lows at low latitudes hitting the west coast most if not all summer! This is why I was predicting snow around summer solstice.

Yes, we are thinking high elevation snow for Sunday night and then again next Thursday.

We are also thinking that this pattern bodes well for an even stormier winter starting in late October or early November. Maybe not Donner like, but more than last year! We will have a much more detailed explanation sometime this summer.