It appears we are in store for a short break- starting Monday Nov 28 afternoon thru Tuesday night- from the parade of storms that have recently lined up to get Tahoe started off on the right track this year. This break, however, appears to be short lived with a cold inside slider type system clipping North Lake on Wednesday morning/early afternoon Nov 30 and then a weak ridge of high pressure establishes but albeit a weak one and nothing like we saw during the 2011-2015 Winter in January and February. It then looks like the Pacific wave pattern shifts with both the subtropical and polar jet coming off Eurasia meeting in a sweet spot in the Western North Pacific around Japan. This combination of warm and cold is perfect for the formation of large low pressures that will grow into very impressive storms as we enter into polar night and cold air circulates down from the North Pole. In addition the ITCZ or MJO is acting up in the central equatorial pacific creating an equatorial Rossby wave that should oscilate the active thunderstorms easterly in the next week which supports a more zonal flow in the West North pacific with troughing off North America. Lastly the anomalous warm North pacific "blob" that climatologist thought might re establish this Winter 2016-2017, like in the later drought years 2013-2015, and subsequently created some super strong ridging in the North Pacific, has been smashed to smithereens and is now very cold- around 3-5 degrees below normal in a large area below the Aleutian islands. This should help keep our strong West Pacific lows in strong intactness and strength as they rotate over this cool ocean water while entraining warm air from the south. Moreover off the coast of California and Oregon the ocean sst's are anomalously warm indicative of the Winter Davidson Current being established. If these teleconnections stay established into next week-which the should- it will be much more than enough to break down the omega block and open up the storm door once again and this time the door could open more than we have seen in a very very long time!

The storm for this weekend does not look as impressive as once forecast. Here is the total precip amounts as forecast by the ECWMF: 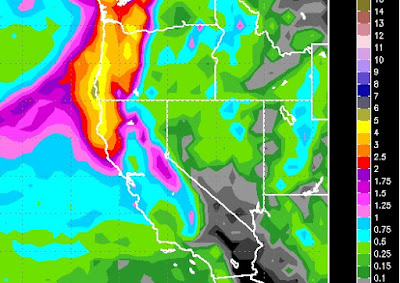