Starting on June 8 Thursday a big pattern change is taking place with a very unseasonable strong low pressure rotating down from Aleutians and could bring as much as a foot of snow above 8000 ft, adding even more white stuff to our already incredibly large snow pack in the Sierra. The meridional angle (El Nino type trajectory) of the jet stream in the North Pacific is following a very similar path to what brought us saturated air masses throughout the Winter in 2016-2017. Moreover, it seems the Arctic Oscillation is finding a quasi equilibrium more around negative than positive meaning the pressure gradient in the North Pacific on the southerly extent of the northern hemispheric jet stream (westerlies) is lower than average thus allowing the jet stream to dip down into California. Also the Antarctica Oscillation is finding a quasi equilibrium in the positive (climate change and a warming planet could be fueling this pattern change) meaning the jet stream is hugging the ice shelf more frequently and going more zonal with less amplitude in the planetary waves. This flattening of the Rossby or Planetary waves in the Southern Ocean/hemisphere seems to allow the Northern Hemispheres jet stream to find a lower latitudinal flow regime in the North Pacific thus as the Southern Hemisphere approaches Winter with the storm path stacked against the ice shelf the Northern hemispheres Westerlies have more flexibility to move toward lower latitudes like Tahoe.

Another interesting attribute to our atmospheric behavior lately is the global "Specific" humidity (amount of water vapor in atmosphere) levels and "relative" humidity (how close the air is to being completely saturated with water vapor) levels. As our earth warms with increasing levels of Carbon Dioxide the science is showing that specific humidity levels are on the rise and especially rising since the strong El Nino of 1997-1998! This makes since as C02 levels rise and the earth warms that the earths heat budget and equilibrium will have to relinquish its heat by water evaporation and/or the phase changes of water from liquid to gas phase or cloud development. This is what NASA has to say about these changing humidity levels:

The drivers of this are not yet well understood but differences in rate of warming between land and ocean, and land surface water availability may be factors. Saturation—the point at which water vapor condenses back into water or ice, often forming clouds—depends on the air temperature, and air temperature around the world is also rising. Over many land areas, it’s getting warmer faster than it is getting wetter, which means the air is less saturated (relative humidity goes down), even as specific humidity goes up.

This is very complex science to understand how these changes are going to influence our climate systems, but what seems plausible is that with increasing specific humidity levels and more cloud producing nuclei (CPN's) would be conducive for more low pressure development globally meaning increasing likelihood for cyclones, hurricanes, typhoons, Noreasters, Atmospheric Rivers etc. However, the temperature of the land masses that are warming- especially along the southern extent of the Jet stream (i.e. central California)- will dictate whether the low pressures have the ability to stay intact and utilize the increasing specific humidity levels to rain out over the land and interior mountains like the Sierras. This brings me back to the Arctic and North Atlantic Oscillation I spoke of in my last post and how it relates to these wetter air masses impacting land and mountain terrain. When the Arctic Oscillation or North Atlantic Oscillation swings negative and allows colder air to spill downward into California or Europe it supports the low pressures to rain out and redistribute the water that has been transpired/evaporated from the oceans and the increasing specific humidity levels above the oceans thus allowing the air mass to reach 100% relative humidity above the land mass and begin to rain. My point here is that California weather and the Arctic Oscillation are very closely linked as specific humidity levels rise and our land masses warm. 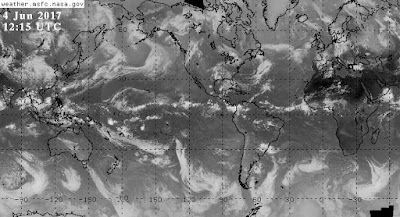 Bottom line these increasing levels of specific humidity are going to be very important to study and relate to the teleconnective global patterns that allow the moister ocean based atmosphere to transport the overseas low pressures into regions like Central California, and not forgetting that California has the ability to generate extremely warm temperatures due to our geology and latitude geographic placement. Who is going to win the battle between warming land masses and increasing specific humidity levels? Last Winter we all know who won!!!