Snow on Tap For Next Week

As the resort ski season winds down, Ma Nature is saying, "not so fast".

A Pacific storm will drop out of the north, pull up moisture and could well produce valley snow and will certainly produce mountain snow. This storm will NOT be shadowed so we expect precip throughout the Carson Range and even into the valleys.

This storm will continue to strengthen and will produce very heavy snow for the Rockies.

For us, we are expecting 6-12 inches of snow for the Sierra and Carson Range. Mammoth will get around double that. There are places in the Rockies and central plains that could be looking at 4-5 feet of snow. 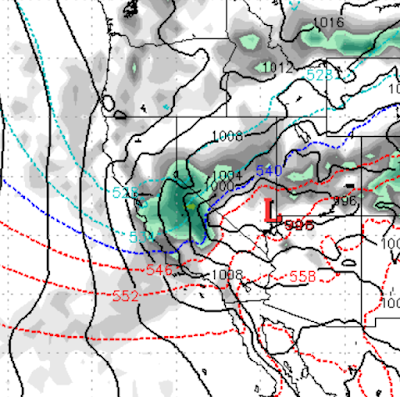 Notice the very cold air coming down from the north. Temperatures will be off by as much as 30-40 degrees compared to the last few days. Having said that, they will quickly recover to near or above average by late next week.

What is most impressive about our storm, is it picks up strength as it moves across the West and into the Northern Plains. If this is snow for South Dakota and Western Minnesota, it could come in record amounts.