Not Much Has Changed, Not Much Is Changing

May 30, 2011
Is This The New Status Quo
For you summer enthusiasts, I am not seeing anything on the horizon that will change the weather pattern that we have been in for months. Blocking High Pressure is anchored off the coast to the west. This is a very large area of high pressure. That area needs to move south for our temps to rise. The storms are moving around that area clockwise which is pulling unseasonable cool air in from the north. Occasionally, the ridge slides east and our temps bump into the mid to upper 60's, but then it slides back west and that opens the door for more cooler weather. The long range models are showing no change in our current weather trend. Here is our current situation: 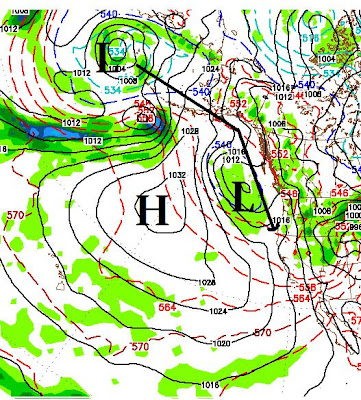 For you drought mongers and global warming enthusiasts your silence in deafening. I have to admit, I do not remember a May like this one.
Global Warming, Fact or Fiction You Decide
There has never been a better time to start our global warming debate than a 20 degree day with 1-2 feet of snow coming two days before the month of June (See Squaw Valley Weather Yesterday). There are a number of schools of thought, but the two that dominate the debate are the following:
However a third school of thought exists that is gaining some traction:

The Earth is not warming. In fact, the earth is at the beginning phase of a minor cooling period. That is due to the activity of the sun which is theoretically controlled by planetary alignment, especially Jupiter

The first school of thought has arisen from a science (I use that word loosely), that has been paid out Billions of dollars worth of grants to studies that in almost all cases must conclude that the planet will come to an end if we don't do something today.

The 2nd school of thought comes from a growing number of scientists and meteorologists that have studied the data and believe that the Scientific Process was not used to produce the results of the first school. In fact numbers have been intentionally fudged to keep the money coming in.

The third school of thought comes from a group of mathematicians, statisticians and computer scientists that have never received a penny in grant money. These guys are good. About a year ago, they predicted one of the coolest winters for the Northern Hemisphere on record, looks like they were spot on. Many of the long range forecasters from accuweather.com subscribe to this theory. Much of the weather data posted on this blog comes from accuweather interpretations.

A Massive Winter Heading for the Northern Hemisphere?

If you fall into the second or third school of thought, then you must have ties to big oil companies and be taking kickbacks under the table. In fact to not think the way of the global warming liberal, guarantees you excoriation at the highest levels. Meteorologist, James Spann said this in his Global Warming Weather Blog:

“Billions of dollars of grant money is flowing into the pockets of those on the man-made global warming bandwagon … Nothing wrong with making money at all. But when money becomes the motivation for a scientific conclusion, then we have a problem. For many, global warming is a big cash grab.”

There are a number of computer scientists who have derived very interesting long term climate models. They predict that we are in the first or second year of a "mini ice age" (Landscheidt Minimum), which will last around 30 years. After that they see a significant, long term warming trend. If you want to read an interesting website by some very smart people who have studied this stuff for decades, who have not accepted a penny in grant money to arrive at a particular conclusion, follow this link:
Earth's Future Climate
One of my favorite lines from the site:
"After the Landscheidt Minimum (30 year cooling period) which will be short and sweet, there looks to be another Dalton type event which is not considered all that strong. After that the planet will stay on a warm plateau for hundreds of years, lets hope we have learned by then that the warming we will enjoy is a natural state."

Does anybody miss having some mild days or weeks in the spring?? Can I have a show of hands?

Global Warming Will Wipe Out The Rain Forests
To fuel the controversy, one claim that global warming scientists have made is that as the atmospheric temperatures rise above 27.5C, that plant life in our planet's tropical zones will be overrun by drought tolerant plants. However, a bunch of very smart scientists got together and went back 56 million years to the The Paleocene-Eocene Thermal Maximum. During this period of 20,000 years or so, the tropical temperatures rose to an amazing 31-34C. However, rather than tropical plants dying off and giving way to drought tolerant plants, there was no significant change. In fact, extinction rates remained almost identical while new species increased. Yes new species. Many people are misled to believe that we have a finite number of plant species on the planet, and when they all die off due to global warming, we will have no plants. Bunk! The earth is constantly producing new species of plants.

Global Warming Will Change Everything But Wind
This is one of my favorite charges from the Global Warming community. Global warming will change everything. The wet will dry out, the dry will flood, the agricultural rich will become desert, etc, etc, etc ...  One thing that for some reason will not change anywhere?? Wind. Yes, wind should stay pretty much the same. Amazing. Why? Because, the warmers believe the US should be re-powered with wind. Of course that raises a conundrum? If indisputable rising temperatures are going to radically change the earth's climate, how do we know where to put our wind farms to save the planet? No worries, wind will stay the same. How lucky for us!

Climate Gate
If the huge money trail, the false science, the big ball out there in the sky does not convince you that man made global warming is a complete farce, then research the Climate Gate scandal. In 2009 a computer hacker broke into the servers at the University of East Anglia s Climate Research Center (Global Warming Epicenter). The hacker posted thousands of emails and hundreds of documents that show just how desperate the global warming community was to keep the funds rolling. Among the fraud: The deliberate non publication of study results that contested any type of global warming. The deliberate discarding of data because, "we know this cannot be true". I can go on and on. See for yourself:

Conclusion
I believe in being a good steward of the planet. I do not believe any government should tell any citizen what they can drive or how much energy they can use. That is up to the free market. Throwing away hundreds of billions of taxpayer dollars to promote a false science to advance an agenda that is not in the best interest of most people is just wrong. Less than 2% of the earth is populated. It is nothing but arrogant to believe that man can have any affect whatsoever on climate. I did not even talk about volcanoes, earthquakes, ice ages, etc. Moving forward I will publish little known facts about climate change from time to time. I will also publish links to long term weather forecasts from the Landscheidt site. Remember we are just entering 20-30 year period of much cooler weather, especially the northern hemisphere. That is based on historical sun activity data.

I believe the global warming debate hit its peak about two years ago, which was about the same time that we entered the Landscheidt Minimum. The best way to put this debate to sleep and stop the wasting of money chasing this false science is for the climate to grow cooler and that is what I believe we can expect for the next 20 - 30 years.

What does that have to with the Tahoe Weather?? POW and long seasons for 2-3 more decades. I am not saying that every winter will be like this past winter, but from a general trend, we should be at or above our average snowfall and at or below our average temperatures.