October 23, 2012
Current
3 feet of snow has fallen in some areas of the Sierra with what appears to be another major snow event poised to hit this evening. The following shows the EC Model for tonight: 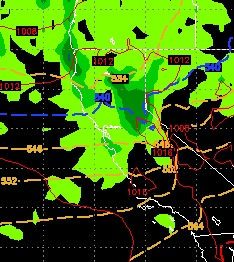 When all is said and done, many mountain areas around Lake Tahoe will pick up 4-6 feet of snow. That should provide a very nice start to the winter. The good news is that this storm was not an anomaly such as a typhoon crossing from Japan. This storm dropped out of the Gulf of AK and picked up ample moisture from the Pacific Ocean and dumped. That is a good sign for the storm machine to start cranking up.

El Nino Watch
El Nino has weakened and the ENSO outlook is for neutral to weak conditions. About 1/2 the models are saying we will move into a weak to moderate El Nino for the winter of 2012/2013, while the other half are saying we will remain in a neutral ENSO.

Next Storm
A blocking ridge of high pressure will move in on Friday and block the next couple of storms from getting down to us. That ridge breaks down around Halloween and another decent looking storm could be headed our way around November 1st or 2nd. Here is a look at the forecast for late on the first of November: 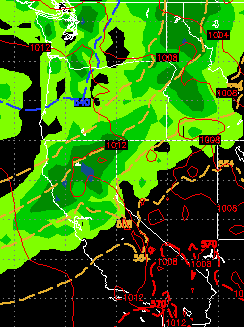 A number of models are showing this progression so I thought it was worthy of mention. The above model is the EC.

Long Range
Looking a month down the road it would appear as the storm cycle may dry up after the 3rd of November until at least the middle of the month. Of course that is just guess work and what one long range model is predicting.