December 18, 2013
San Francisco and most other cities in California will remember 2013 as the driest year ever. Take a look at the following chart: 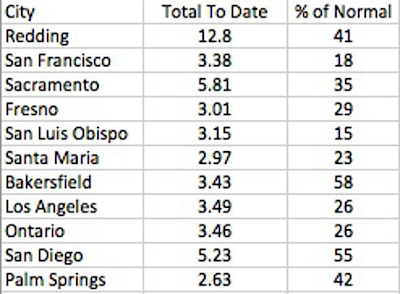 This shows the total rainfall to date and the percentage of normal. San Francisco is among the driest of the dry cities in California. Reno, Carson City and all of Tahoe are experiencing similar numbers. What looked like a decent December a few weeks back has turned dry, like the rest of 2013. Remember the snowy December of 2012. As soon as the year changed, so did the weather. And it hasn't changed back since!

We continue to have a ridge of high pressure pushing storms east and north. That trajectory is never good for a major precip event. All of the models and now forecasters are pretty convinced that this pattern will remain in place through the end of 2013. I am starting to hop on that band wagon.

However, there is hope. Our biggest, wettest storms have traditionally taken place when a certain condition is present. That condition is a combination of the Arctic Oscillation (AO) and Pacific North American (PNA) Indices. Historic evidence suggests that when these two patterns are negative, giant, moist storms come into the California Sierra. I am talking about an anomaly called Atmospheric Rivers. These rivers direct moisture right into our area in copious amounts.

Why am I bringing this up? Looking into 2014, a decent chance exists for both AO and PNA indices to both go negative. Possibly as early as January. Here is a look at both indices trends:

We can see that the PNA has been negative and is forecast to remain negative. When the AO is positive, the cold air is literally trapped by the Northern Jetstream in the Arctic. However, there are indications that this index could well go negative sometime in January. If that is the case there is a good chance to break what has now become a historic drought.

I wish I had more for you, but for now let's hope we can squeeze as much as possible out of these sliders until the real storm machine cranks up again!