Coming Storms Could Be Bigger

December 04, 2014
A series of storms are headed our way and if the models are correct, should bring even more snow to the Sierra around Tahoe. The first wave comes in very late Friday night and should stick around for most of Saturday. The next Disturbance comes in very early Monday morning. Both of these are minor disturbances.

A much larger system will then make its way to our area and could arrive very early on the morning of Thursday December 11. This system could hang around long enough for the next system to rear end it! Here is a look at early Thursday, 1 week from today: 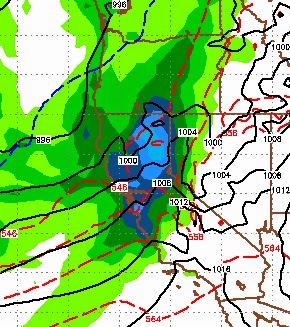 This system has several waves and is moving Northwest to Southeast and could (still a week out) score a bulls eye on Tahoe. Another very large system could appear on the heels of this system, but that is even further out. The models have been pretty good, at least the ones I look at, this year so I am very optimistic. Then again as a friend told me on the mountain today, it is because his friend brought bad luck and has now left for the winter ... hmmm?

In any event, here is what we are talking about in the way of liquid precip over the next 7-10 days: 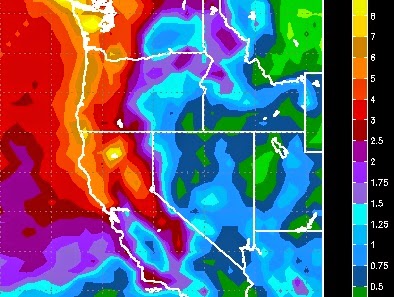 If this proves out, the coming storms will be much bigger than these most recent storms.