Dry Spell Ends in about a Week

February 11, 2016
Hard to complain about our recent run of weather. Especially after all the snow we have received here in the Carson Range. The dry warm weather will continue through next Tuesday, then things change.

Here is a look at the forecast for late Wednesday the 17th: 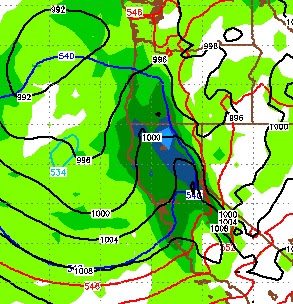 This is a decent sized storm and Tahoe is the Bullseye!. It should hang around for about 48 hours and deliver moderate to heavy snow for our area including the Carson Range (2-4 feet). As we approach next week, I will hopefully be able to pinpoint amounts and elevations.

Looking a little further down the road, we are seeing a change coming for our area. It will turn wet again, but the storms will be much warmer and should move further south and impact Southern California as well. It seems that the similarities to 1995 are becoming more apparent. This is a note sent to me by our top researcher. We try to avoid too much technical terminology, but Paul is very good at explaining what he is seeing. What he is seeing is after a dry February, March could bring back heavy rains to California and heavy snow to the Sierra. Read for yourself:

Just a quick note that global atmospheric and oceanic dynamics appearing very similar to 1995. The NPDO in warm phase, IOD in negative neutral, MJO very active, and El Nino southerly jet weakening but still established. That year February was mostly dry with a January precipitation wise very similar to what we had this year and a subsequent very wet March at least along the Central Coast. I recall that year the MJO acting up the end of the first week of March and two strong Hadley cells formed, one off the China sea and another around Hawaii (pineapple express). I have been forewarning people such as Daniel Swain that this El Nino was going to involve an active MJO and that heavy rains are going to come in March with strong moisture rich atmospheric rivers (neither MJO or AR have been affiliated with strong El Ninos until maybe now). From a water management standpoint and sustainability view if the snow levels do not get too high this is much better timing for the snow and rain to accumulate in reservoirs and mountain snow pack during March into mid April rather than in February and then having a dry March and April which causes the snow to sublime directly into water vapor -or below the snow line- the rivers go subterranean and the receding water and stream flows do not make it to the reservoirs.

I am predicting that with global warming (increased CO2) and more winter driven El Nino patterns appearing more often- along with a hyper active ITCZ and MJO mitigating built up ocean heat- that this will become more of the pattern we will start to see in California-average December rains, above average Jan rains, Dry february, and wetter March's and April's. Lastly i am seeing us entering a much wetter regime in North Pacific than the last five years and next year should be average and then winter of 2017-2018 the West Coast could experience a colossal el nino with a subdued MJO and lower subtropical jetstream than this year. I have not bought into the mega drought California's gonna go high and dry from increased CO2 levels. We shall all see soon how our earth adjusts! Lastly, I have included SF precip graph 1995 which is starting to appear what we might see this year?
cheers to Miracle March ahead, paul huntington