February 29, 2016
Well, we hope you enjoyed the beautiful February weather! But, as advertised, we are going to start up a new storm cycle. The fun starts Thursday as a couple of weak systems begin to push around our persistent ridge of high pressure. Then late Saturday night a much bigger storm appears poised to blast Tahoe and knock our ridge of high pressure on its butt! Here is a look at late Saturday night: 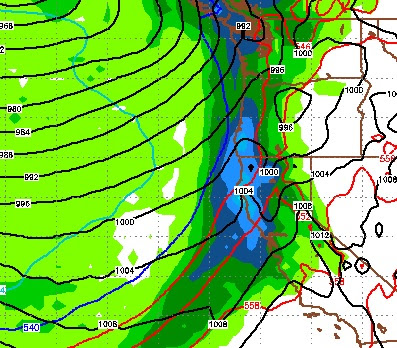 This storm is packing a lot of moisture and should have a significant effect on our weather. Right now the snow levels look reasonable as things will cool down with the first two weak systems. I am guessing starting at 7,500 and rapidly dropping as the cold air comes in with system.

This system will stick around through Monday and should be bringing moderate to heavy precip the entire time.

Things to continue to stay interesting. Our first signs of a true El Nino pattern, which will undercut the ridge of high pressure and tap into subtropical moisture looks like it will set up next week. I want to show you a view of the Pacific as this anomaly unfolds, but it is too soon. Suffice it to say things are going to change dramatically.

Our top weather forecaster, who has really been spot on all year sent in this report yesterday. Again, Paul H. tries to make things understandable while building a case for his forecast. He talked about this pattern over a month ago. Here is an updated to his earlier forecast:

Miracle March storms look to start next Thursday March 3 (CPC is also seeing above average rains through May also, sweet)!! It appears the El Nino jet is re-establishing itself and fighting the rex block. This next Thursday storm should undercut the ridge and open the storm door for at least a couple weeks. If the MJO acts up it could be our first big pineapple express storm since March 1995? This is going to be extremely interesting and bit nerve racking to see what unfolds not just from a water deprivation drought standpoint but possibly catastrophic flooding. The willows and other riparian trees have leafed out now along the Coast and Central Valley and the frictional forces and shear is going to impede river flows sending it high onto the flood plains! We should know what this storm's going to do by this Sunday afternoon i think and should be one to keep our audience aware of. However this ridge pattern is appearing very persistent and i have no guarantees on this being a huge water producer but should help buckle the North Pacific high and allow more storms to make there way into Central California. I sure hope so after all this El Nino hype!!
cheers and be careful of avalanches late next weekend....remembering the Alpine slide in March 83'!!

Here is a look at the forecast for late next week as the pattern changes further and sets up to hopefully bring much needed moisture to Central and Southern California: 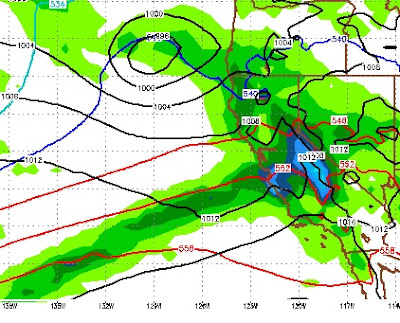 Rather than being on the southern edge of the storm, we are now on the northern edge. The moisture tap for this storm is straight out of the tropics, which we will also see over the weekend.

In a best case scenario, Mt. Rose could pick up 8 feet or more of snow in the next couple of weeks. However, this pattern is fluid and we will keep a close eye on things. Look for more posts in the next few days and more frequent posts through March. Sorry about the lack of posts, but not much to say in February except for the one storm.