February 06, 2017
The biggest change in our forecast certainly has to do with the snow levels. First of all, take a look at what we can expect tomorrow: 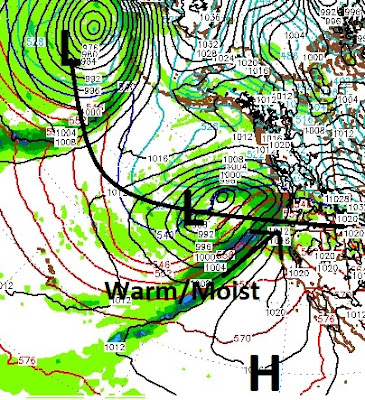 This storm is packed with moisture. It is arriving on the heels of our last storm so we will continue to see moisture and wind until about next Friday afternoon. This moisture is coming straight from Hawaii and with it will come some very warm air. Much warmer than what we forecast last week. Although snow levels will probably not get much above 8,000 feet, we could see a period of rain on half of Slide Mountain. This is a pure pineapple express, here is a look at the Pineapple Express in its purest form: 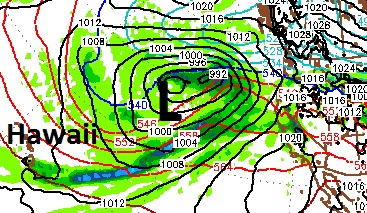 Pinpointing exact snow levels is very difficult, we believe 8,000 is pretty much as high as the rain will get for any sustained period. However, we could be way off too. If we see rain at 10,000 feet, things could get dicey, especially with all the moisture packed into this storm. I wish I could tell you with certainty what will happen at what elevation, but I cannot ... no human can.

Around Saturday, high pressure will move in and we will start to dry out. This storm is large enough that I expect significant valley rains as well. Perhaps as much as 2 inches, but probably around an inch. The foothills can expect around double that, although we have seen some significant shadowing with southwest winds.

Things looking good for the grand finale soon as the MJO oscillates into the Central West Pacific and signs of El Nino are beginning now! I am extremely curious about the mid to late February and into March period!! This is unprecedented to see a La Nina change over to a El Nino in a four month period and this anomalous wet year after the average to below average rain wise "super" el nino year will make cause for all weather to be re-evaluated and studied in new light! These shifts are called "magic gates" and have occurred in 1976-1977, 1998-1999, and now appears like we are entering another one. This one is interesting that its causing the planetary or rossby waves along the mid latitudes to go more negative in terms of arctic oscillation, north atlantic oscillation, or antarctica oscillation and this means a lower latitudinal zonal jet stream when the waves flatten out thus a wetter lower latitude geographic area like Central California. I am hypothesizing a moister than average summer with strong monsoons wrapping up clockwise from the four corners high into Southern Sierras and around Tahoe, a hot dry Fall and another very wet Winter next year. The drought should be a very distant memory shortly and its nice to shut the mega drought dooms dayer folk up that tried to profit off pseudo science that has no scientific backing.