Two More Storms to Hit Tahoe Between Now and Tuesday

March 22, 2017
The first in a series of the 3 storms is just about past us. We will have a very short reprieve until the next storm arrives. That storm is scheduled to show up late Friday afternoon. It is a quick moving storm and will be out of here in less than 24 hours.

Then we will have another short reprieve ahead of a slightly bigger storm scheduled to come in very early on Monday morning. Again, this storm will not stick around for long and will be long gone within 24 hours.

Here is a look at the forecast for Friday @ noon, just ahead of the storm: Pretty impressive as it makes its way inland. However, the storm will break-up somewhat. It is also moving pretty fast. Snow levels appear to be around 6,500 -7,000 feet for this event.

The next storm begins to move in very late Sunday night: 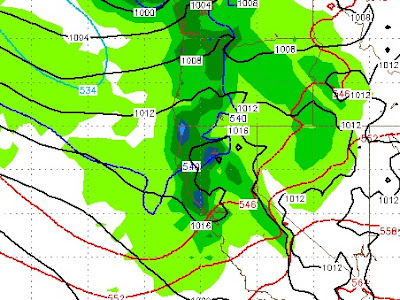 This appears to be a slightly colder storm with snow levels forecast to be around 6,500 feet. It too is moving fast and will not hold together well as it makes its way to Tahoe.

After this storm clears out, we will have a warming and clearing trend that should last into the following weekend.

Here is a look at the precip forecast: 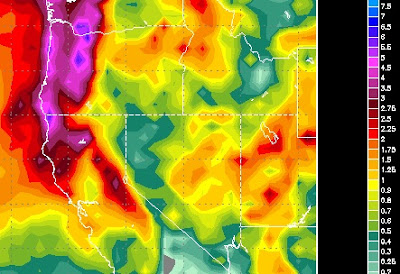 Along the crest at the highest elevations, we may see an additional 18-24 inches of snow. The Carson Range will be shadowed somewhat and we expect perhaps another 6-12 inches by Monday evening.