January 03, 2017
If you read my last post, not much has changed. We have 3 major winter storms that are closing in on Tahoe that are going to produce snow like we have not seen in decades. Let's talk a little bit about timing as we have received many comments about how forecasters are saying something one day and completely changing their mind the next. That has not happened here. For a synopsis, here is a link to my last post:

I strongly suggest that if you are not familiar with this site, you check it out. Unofficial Mt. Rose will give you the details of what is going happening on the mountain:

The first storm is knocking on the door and the timing is right on from what we said late Saturday. Here is the forecast for the next 24 hours: 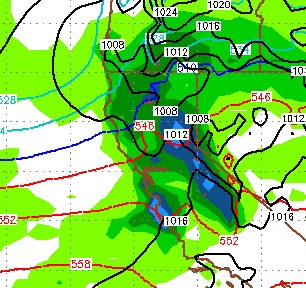 There will be a slight break starting late tomorrow that will last until late Saturday morning. Then a massive storm comes to the area that is moisture packed and will effect most of the state of California, with Tahoe being in the Bullseye. We are going to see 3+ days of near constant heavy snow in the mountains, including the Carson range. At its peak here is the forecast for Monday @ noon: 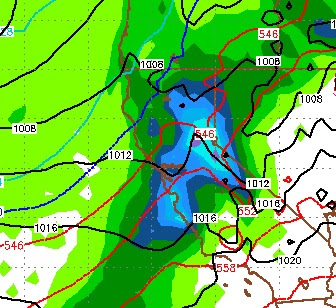 The next storm will arrive on the heals and it too looks to be massive. Here is the forecast for Thursday January 12th around noon: 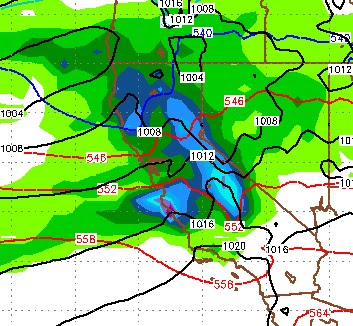 This storm will last from early Tuesday morning until through the following Friday (the 13th).

Record Breaking Precipitation
Folks, I don't know how to say this: The amount of moisture that is coming our way is perhaps unprecedented. In 15 years of forecasting Tahoe precip, I have never seen anything that even compares with this. This is the forecast liquid precip for the next 10 days: 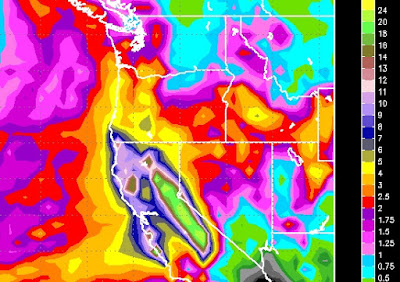 Some areas around Tahoe could see 2 feet of liquid precip. The high Sierra west of the lake could receive upwards of 25 feet of snow in the next 10 days. The Carson Range above 8,000 feet could (maybe) receive in the 15 foot range. Again, I have never seen anything like this.

Snow Elevation Levels
This is tricky. With this much moisture we would normally expect very high snow levels. However, there is some cold air mixing with storms born in the north, pulling sub-tropical moisture.

Snow levels are going to be like a roller coaster during this event. At times they will come down to 6,000 feet (Lake Level), then as the storms roll in, with their counter clockwise rotation, they will rise as high as 10,000 feet. Here is a look at the 850 mb temps this weekend. 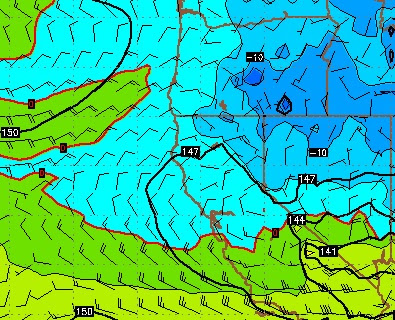 Generally the blue means snow levels in the 6,500 foot range. The dark blue is around 4,000 feet. The green is around 8,000 feet. That area of green does come up to Tahoe, thus the roller coaster to which I just referred.

I believe most, if not all of this event will be snow above 8,000 feet. Those snow levels could be lower. However, with the moisture content of these Atmospheric Rivers, there is at least a chance of snow levels that could cause flooding. In a worse case scenario, this flooding could be Biblical in nature! Ok, a slight exaggeration but you get the idea.

We will keep a close eye on this, but forecasting snow elevations is a crap shoot at best. I believe the valleys will receive all rain. There will almost certainly be flooding as that rain will move down the hill, run over the banks and create a major mess.

Avalanche Danger Highest in 20 Years
Normally I would not forecast Avalanches. In fact, here is the link to the Sierra Avalanche Center:

These folks take Avalanche danger to a real science. They know more than we will ever know. However, we do know this; 20-30 feet of wet snow sitting on reasonably frozen steep terrain could create some of the largest avalanches we have seen in decades. My advice would be to stay out of the back county until things settle down. At bare minimum, go the Sierra Avalanche Site before heading up into the mountains, if could save your life.