As Weather Pattern Changes, Storms are Stacking Up

March 15, 2020
The long awaited weather pattern change has finally arrived and should usher out the ski season in fine fashion as the next 6 weeks looks really good. I would argue that the pattern started it's shift about a week or 2 ago as our ridge of high pressure started getting kicked around, something we had not seen much of in the last 2 months.

The current storm could possibly exceed our forecast of 3-6 feet for the Carson Range and will certainly exceed the 6 feet we forecast for the Western Crest. It has picked up a very nice moisture tap from the sub-tropics and is feeding that warm moist air into the cold trough which is now just off the coast and stalled. 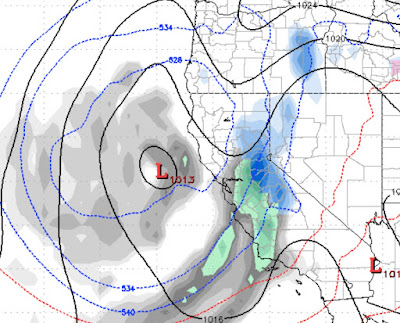 Eventually this storm will move inland and pass almost right over Tahoe. It will continue to provide plenty of much needed moisture through Tuesday.

We are tracking at least 2 more storms that are eerily similar to this storm. The first of these storms we believe will move into our area sometime late next Saturday (March 21st). That storm too, will stall just off the coast: 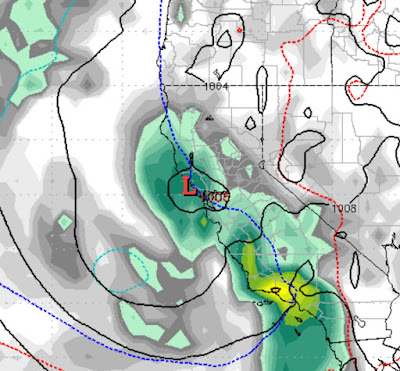 Eventually, the 3rd storm in our series will push the 2nd storm out. However, you may not notice as we will be receiving near constant snow for the better part of a week starting next Saturday. With the current storm winding down there will only be a 2-3 day break from Wednesday/Thursday to Saturday.

Here is a look at the forecast for early Tuesday morning (March 24th) as this 3rd storm pushes out the 2nd storm and follows the same trajectory of it's two prior sister storms: 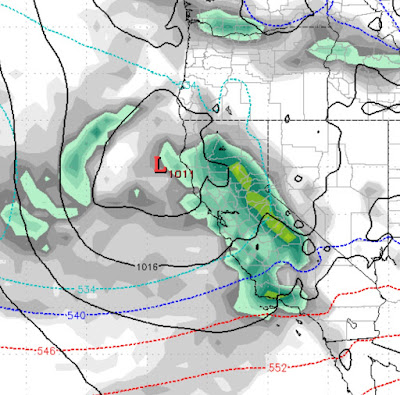 After this 3rd storm, our severely below average snowfall, will begin to approach average. All things considered, this has been a pretty decent year. We were very lucky to get those early December storms and the snow held out up until now where we are talking about major precip. Here is the forecast for the next 10 days; remember this is liquid precip and should produce 10-15 inches of snow per inch: 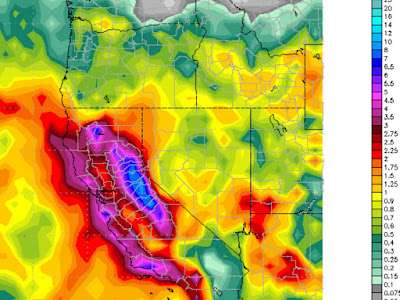 We can get back to average in a hurry with 12-15 feet in the next 10 days. Of course as we all know Ma Nature is in charge, not us. Many of us think we are in charge of our climate, but that is simply not true. Averages have remained the same for thousands of years. Since man started showing up, there have not been any major climate changes ... or there may not be man!