February 17, 2011
This is truly an extraordinary weather system. Current conditions in Reno and along the Mt. Rose Cooridor:

Yes that does say Lake Effect snow from Tahoe is affecting the Western Nevada Valleys.

Take a look at the big picture currently: 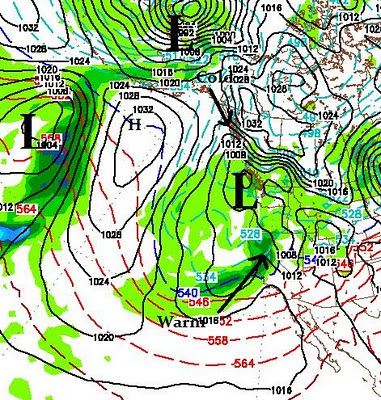 As you undoubtedly felt, a strong cold front moved through the Tahoe area yesterday. Of course with it, cold air has settled in. However a warm front is now pushing up from the south and is preparing to collide with our cold air. The blocking high pressure system is still firmly in place to pull the warm, moist air up into our area. This feeds the storm located off the coast of Southern BC. What does it all mean? Snow and lots of it for the Sierra. We are now leaning toward much of this snow spilling over into the leeward valleys of the Sierra, including Reno and Carson City. The NWS is talking about 5 to 10 inches of snow along the 395 corridor from Reno to Minden on Friday morning, just in time for the morning commute.

Here is a look at forecast precip totals from now until Sunday. This is in addition to the heavy snow (3-5 feet) that we received yesterday: 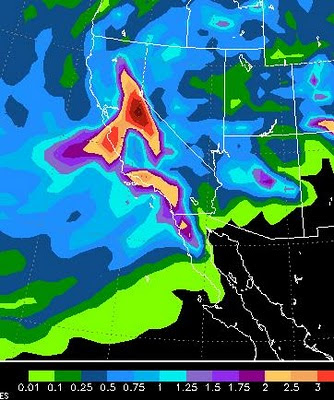 The storm is now poised to really hit the central Sierra hard. However, look for an additional 2-5 feet in the Tahoe area by Sunday. The heavier amounts will now be on the south side of the lake. Mammoth is going to get slammed over the next several days.

Storm(s) For Next Week
I will have to keep a close eye on this one, however GFS is leaning toward next week's storm to stay offshore and move south of our area, bringing very light snow at best. Take a look, notice the offshore storm in the first image and how it moves straight south in the second image: 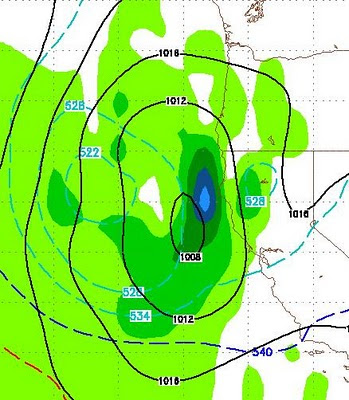 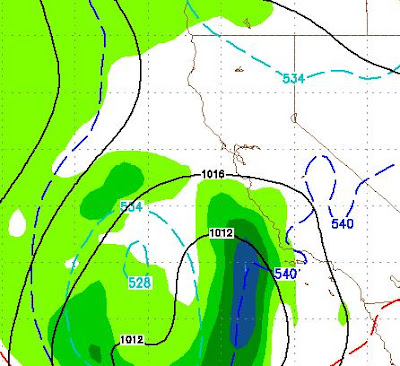 Tuesday Morning
The above images are from the GFS model. The EC model is saying the same thing for next Monday, Tuesday and Wednesday as the storm forms off the coast and veers south: 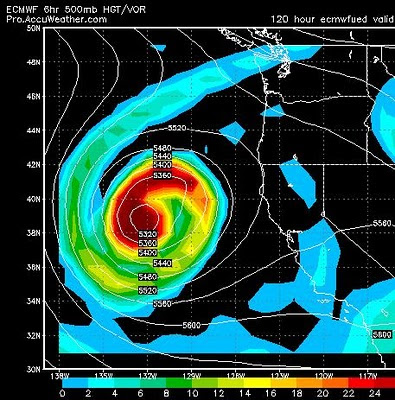 Having said all of that, we are not through with this pattern by any means. We will remain in a very stormy period and the EC model is forecasting another giant storm poised to hit Tahoe around the 26th of February. In addition, the NOAA PNA remains negative into March, which means this cool, stormy pattern will continue for at least another 2-3 weeks. Here is the EC look at the weekend of February 26th, followed by the latest PNA forecast from NOAA: 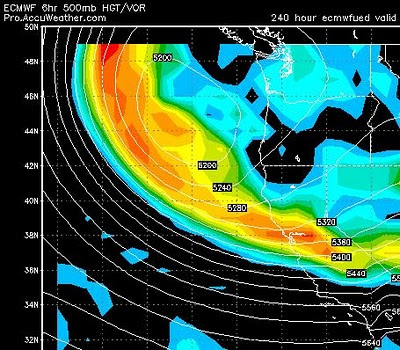 Giant Storm For the 26th

PNA Forecast Shows Continued Storm Pattern Into March
Incidentally, GFS has this storm staying north but still producing heavy snow for Tahoe around the 1st of March. Both models agree, however, that the storm is coming and will produce another major snow event for Tahoe around the end of the month.
Stay Tuned ...