For You Professional Meteorologists, There Is Still Plenty of Room On The Bandwagon

February 04, 2011
I apologize for the headline, but right now we are just waiting for the pattern to change in a little over a week. The good news is that I am not the only one talking about this. The NWS and NOAA have hopped on the bandwagon. I should not be so smug. These guys know a lot more than I do, and get paid to forecast the weather. When they are wrong, it is a big thing. When I am, nobody cares. It is a real risk for them to talk about a pattern change in 8-10 days. But that is also a sign that it is coming and the POW will return to Tahoe. First let's take a look at the PNA, remember a negative number is a good indicator of a stormy pattern:

First Shot At Timelines
This is a very similar pattern to what we saw in December. A massive storm will drop out of the Gulf of Alaska and tap into a very moist subtropical jet and should dump copious amounts of moisture right on Tahoe. As it looks now, we are in the bullseye.

Sunday, Feb 13th is when the fun gets rolling as the first wave of moisture splits off the main system and drops right down through Tahoe. This will be a fairly minor event. However, right on its heels, the main storm will drop down the coast and come ashore in Northern California. By then this storm will be producing tons of moisture as it taps into a moisture plume that will extend to Hawaii (Pineapple Express). Here is what things may look like on Tuesday the 15th of Feb: 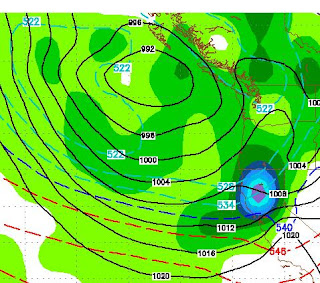 We can clearly see the giant storm. That storm will continue to come down the coast and reek havoc on our weather bringing strong winds and and frequent moisture bursts. Some areas in the Sierra could pick up as much as 5-8 inches of moisture which translates into ... let's just say, a lot of snow.

Near Term Weather
Look out the window, what do you see? Ridge city will continue all the way until the 12th. There will be a minor disturbance Tuesday night but for the most part the weather will be warmer than average and dry. That all changes when the leading edge of the storm comes to town.