June 03, 2011
An unseasonably large storm is gaining strength and knocking on our door. This would be a pretty impressive January storm. It is unheard of for June. It does appear to be the last major storm until next fall. This storm will stick around for the next 4-5 days and drop copious amounts of precip in the region, especially Northern California. Here is a look at the storm as it approaches, this afternoon: 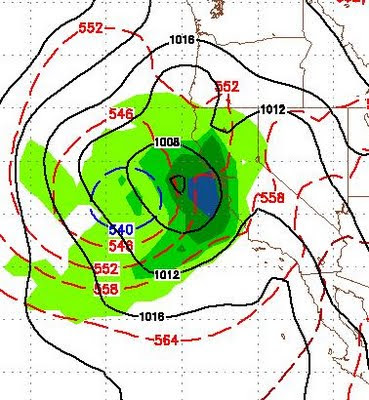 This storm is going to stay stationary for a couple of days and send waves of moisture into California and the Lake Tahoe Basin. Around Sunday evening, it will make it's move and come ashore and track right over Lake Tahoe. Here is a look at early Monday morning (June 6): 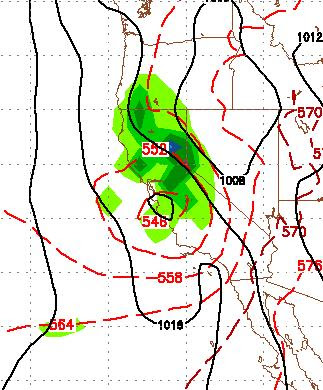 Finally, here is a look at the projected precipitation totals. Some parts of California are going to pick up 4+ inches of liquid precipitation. This map has Tahoe in the 1-2 inch range, but I think that is low, especially over the crest of the Sierra, which could be looking at 2-4 feet of snow. 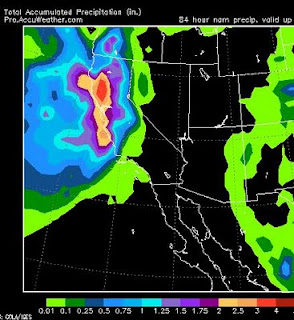 Summer is in Sight
Elusive as it has been, summer is now in sight. This weather system is a game changer, as is often the case with large storms. Starting on Tuesday, the blocking high pressure system will slide south and allow much more seasonable weather into our area. Look for near normal highs starting on the 9th of June. Around the middle of the month, the really warm air moves in and the leeward valley's may see their first 90 degree temperature. This latest storm should backup the Northern California fire season well into July or later.
Water Totals
Since our area is so dependent on the runoff from the Sierra for water, I thought I would show you a couple of charts of how we not only busted the so called drought, but why the ground is now very saturated.  The first chart is stream flows for 2010, which shows the El Nino winter and our streams running above normal: 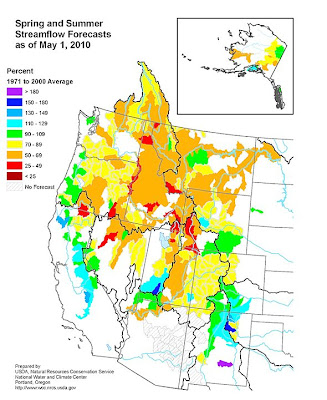 The next chart shows the current streamflow which is running well above normal for nearly the entire west: 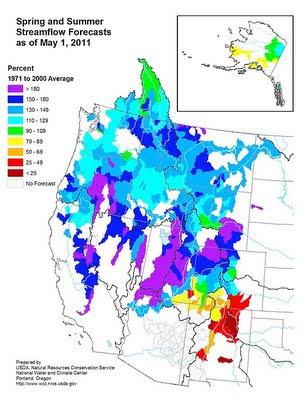 You can see the exception which is around the New Mexico - Arizona border where they are fighting dry conditions and raging forest fires. I have a friend who lives in Alpine, Az. Judging by his facebook posts, conditions are dire in that area with near zero containment on large fires. That is typical of a La Nina year. What is not typical is the West Central US. The great majority of the precip this past winter, came right through the Central and Northern Sierra.

Global Warming (Cont)
Continuing with my exposure of the man made global warming fraud I wanted to talk about the Save The World conference that took place in Copenhagen, Denmark in late 2009. Remember, the elitists who showed up to this conference, which is really a who's who in global warming activism, claim that rising levels of CO2 are causing the temperatures on the planet to rise. This will melt the polar ice caps, raise ocean levels by as much as 50 feet and the world, as we know it, will come to an end. This will all happen very soon. The big enemy here is CO2 from cars and planes.

You would think that these folks would be so worried, that they would arrive at the conference in a hot air balloon or on a bicycle. Actually that was not the case. They all flew their private jets and drove around in Limousines. Talk about do as I say not as I do! The world savers arrived in 140 private jets and rented 1,200 limos so that they could live the high life while in Denmark. In a real twist of irony, the weather was so cold for the conference that it snowed in Denmark. It never snows in Denmark. Somebody up there has a tremendous sense of humor.

Are these the people that you are going to listen to??