February 15, 2012
Short Term
In my last post I predicted between 2-5 feet of snow for the Sierra through the end of this week. Some of the energy of the series of storms, that has been ushered in by favorable conditions, has moved slightly south. Mammoth has picked up 2 feet of snow, while Squaw Valley is around 19 inches since my last post. However, we are not done yet. A series of short waves are due to show up on our door step starting Friday night and lasting through the weekend. These are weak short waves however this will bump up our snow total. The picture below forecasts the precip for the weekend, around 3/4 - 1 inch of liquid, with the cold air could translate into another foot of snow: 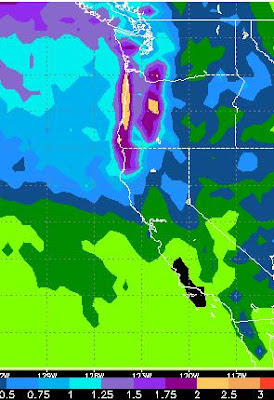 I was really hoping for slightly more moisture, but these storms are just not big enough and lack the cold arctic air to pick up that moisture from the pacific. Thus the Sierra will be probably around 30 inches for the entire event while the Carson range will be around 18-24 inches. We will take it. Incidentally, the Sierra picked up about 30% more snow than the Carson range. Sometimes the vectors of these storms lead to a weakening across the lake and out of the Sierra.

Long Range Outlook
Things are looking good, maybe even great. I talked about the pattern possibly taking a major shift and right now it looks like that pattern change should begin around the 24th of this month.The change will be slow initially. However the Pacific ridge will move significantly west.Cold air will begin to spill out of the Arctic and form large blocking ridges significantly west of Hudson bay. The PNA is turning negative as well. In addition, about that time MJO should be steaming across the Indian Ocean heading toward the Pacific. These are very favorable conditions for a series of storms. Again, the transition will be slow, but by the end of the month look for winter weather and much stronger storms to be heading for California.