One Shot to Put Out Kings Fire

September 22, 2014
The seasons first Northern Pacific storm comes rolling in this week. Looking at the weather for the next 2-3 weeks, this is our only shot to give the 5,000 fire fighters a chance to dampen, or if we get really lucky, put that thing out. Here is a look at the forecast for late Thursday: 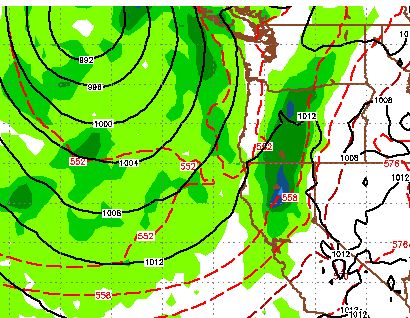 This storm is coming surprisingly south for this time of year. It will bring quite a bit of moisture with it, at least for this time of year. That will turn up the humidity and turn down the temps. It is suppose to weaken the further inland it moves, however if we get really lucky, the entire Kings Fire could get a good soaking. Temps will drop around 15-20 degrees and then slowly recover by Sunday.

There is a chance for much cooler air to come into the area the following weekend, but let's not get ahead of ourselves.

El Nino - 2014
New satellite images are restoring hope for at least a weak to moderate El Nino event that could occur in November/December. Remember last May the forecasters lost their minds and predicted a strong El Nino for Fall 2014. That prediction was based on an anomaly called Kelvin Waves. These waves are really large pockets of warm water along the equator in the central and eastern Pacific. Unfortunately these waves died out and not much has come other than dire warnings that the west coast drought could be around for a while.

However, a few days ago, these Kelvin waves started showing up again and are moving to the east. If they can hold together look for an early to mid-October arrival. Things could get going then, especially for central and southern California. 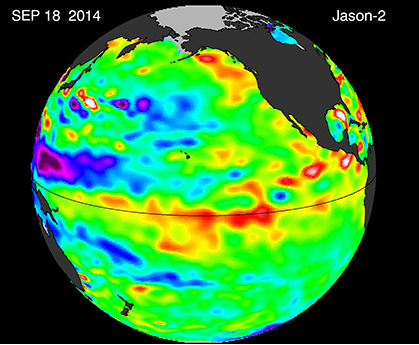 Couple this with warm water up the west coast of the US and we may have the ingredients for some pretty interesting storms in November and December of this year. I do not see another December shut out, that was truly a very rare event.