Showing posts from February, 2010
Show all

Ready or Not, Here They Come 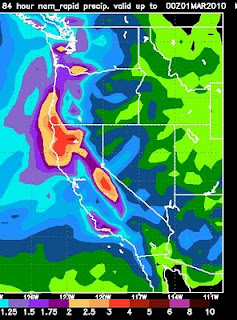 The current pattern will continue for at least the next 10-15 days. There will be nice days surrounded by very stormy days. A very impressive storm is coming in Friday and Saturday that should dump 2-4 feet of snow in the Sierra. The NAM model shows this in the way of liquid precip, notice some areas of the Sierra could receive upwards of 4 inches, which could translate into 3 or more feet of snow:   Looking ahead, we will have a few nice days to start next week before the next system comes in late Tuesday through Wednesday. Looking way ahead, a series of larger storms appears poised to hit us starting Saturday, March 6th and possibly lasting through all of the following week ... but let's not get ahead of ourselves. These systems appear to be rain for the valleys. Couple that with warmer March weather, and the golf courses should be coming back online soon. Stay tuned ...
Read more

Nice Weather - Don't Get Used To It 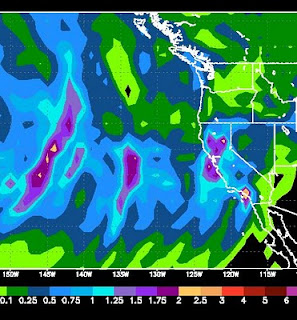 As I wrote about a week ago, things are looking really nice for this week. The valley's could start to push 70 by Wednesday or Thursday with sunny skies and reasonable winds. Enjoy it while it lasts, because it aint lasting long! A number of factors are starting to come together that should provide a fairly sustained period of very stormy weather starting this weekend and lasting into the foreseeable future. Without getting too detailed, the high pressure ridge will move east and the vacuum will be filled by a sub-tropical jet which will bring storms to all of California and the Sierra. Here is an interesting chart. This is the total precip from Sunday to Tuesday. Which should get a healthy shot, but look west. All that is heading our way as well:   Here is a look at a GFS chart for Sunday morning: The storm track should come right over Central California. Not getting too far ahead, a rather large storm looks poised to hit us on March 1, with several smaller storms co
Read more

Spring Like Weather Is Coming - El Nino has passed its Peak

February 08, 2010
We have a cold little system that will be moving through Tuesday and Wednesday. It will bring minor amounts of snowfall, < 12 inches for the Sierra. The models and the PNA forecast suggest that a weather pattern change is coming. That change is for much warmer, dryer conditions starting as soon as Thursday and lasting for perhaps a week or 10 days. There are some indications that a much larger storm could be in the works around the 20th of February. However, this year has been nearly impossible to predict weather. In fact the Reno NWS folks oftentimes have trouble predicting what will happen in 6 hours, let alone 2 weeks. I will keep an eye on that one. In the meantime, polish up those clubs as we could see some 60's not too far down the road. Meanwhile, NOAA is suggesting that El Nino passed it's peak in Late January and beginning to weaken across the entire equatorial Pacific, especially in the mid-pacific regions. The site when on to say that we should expect neutral co
Read more

Decent Storm for Friday and Saturday - Nino Coming Back mid-February 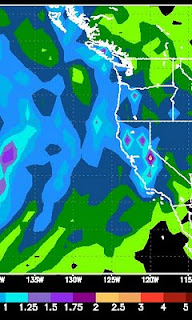 Another decent sized storm is headed our way starting Thursday night and lasting through Saturday. There are a series of very weak disturbances that will come through leading up to this event. First here is a moisture chart for this weekends storm:   Most of the Sierra is poised to receive 1.5 to 3 inches of liquid precip. I should say this is the GFS model, which consistently under predicts moisture totals. My gut tells me the storm will produce around 18-36 inches of snow for most of the Tahoe Sierra, with a larger band down around Kirkwood. Here is a look at the storm as it approaches Thursday night. It is a decent sized storm coming ashore to our north: As it looks today, the best time to hit the pow will be on Saturday. But conditions should be excellent Friday through Monday, especially in the back country. Keep an eye on the avalanche conditions before setting out. You can check them here: Sierra Avalanche Center Looking longer range, the models are starting to point a
Read more
More posts