Showing posts from April, 2017
Show all

Report by Paul Huntington I am seeing some interesting active late season weather beginning around Saturday May 6 and continuing for a couple weeks into Middle or even late May. These wont be huge storms like this winter but more cool showery lows with embedded thunderstorms and enough to warrant people to question "What is happening to our climate system?" Once again the global teleconnections are again in perfect alignment for troughing along the West Coast of North America. Yes, I know its time for Spring and warmer weather but we might need to wait- albeit this weeks heat spike- till June. The pattern that is unfolding is very similar to what brought us rains throughout our Winter and doesn't seem to want to budge. The climatic pattern taking shape in the North Pacific is supported by the Negative phase of the Arctic Oscillation or a weakening pressure gradient between the North Polar low and southerly high in the Central North Pacific along with the North Atlanti
2 comments
Read more 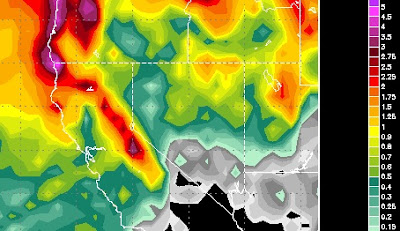 We have 3 systems that will move quickly through and have a slight impact on the area. I do not see any major snowfall amounts in any one given time period, however the total of all 3 systems will leave us with more snow in the Carson Range and Sierra. Let's focus on the total precip and snow levels. Mt. Rose will receive all snow. For the most part snow levels will be around 6,500-7,000 feet. However, the 2nd system could bring in some warmer air and snow levels could jump to 7,500 feet late tomorrow or early Tuesday. Here is the precip forecast: Some areas of the High Sierra, around the western crest could see as much as 3 additional feet. Those areas, above 9,000 feet have picked up so much snow this season, that 3 feet is like a few inches anywhere else. It is interesting that Mt. Rose has led North America in snowfall amounts, because the highest peaks, west of Lake Tahoe at the crest of the Sierra have picked up much more snow, perhaps some areas in the 1,000 inch ra
Post a Comment
Read more

Next Storm Coming Late on Wednesday 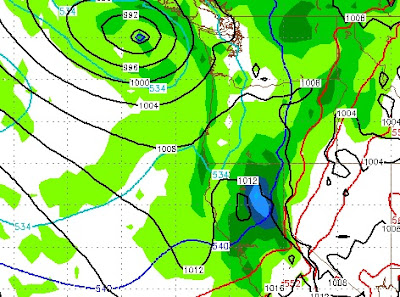 We are tracking 3 storms right now for next Wednesday, then a week from today and then, perhaps, the 21st of April. The last storm hooked up nicely with a moisture tap and we see something similar for the storm next week, although probably not as much moisture by about half. Here is the forecast for late Wednesday night: A decent moisture connection, but nothing like what we saw in the last storm. Snow levels for this one should be around 6,500 at the start and fall to around 5,000 feet as the cold front passes through. That means the leeward foothills can expect more snow on the ground. The following Sunday night see's the next storm come in. This storm does not have the moisture associated with it and will only bring in more cool air. I see light amounts of snow and lot of wind. Here is the forecast for Sunday afternoon as the storm approaches: The last storm we are tracking could show up on the 21st and may bring a return to the moisture tap, we will have to wait a
Post a Comment
Read more 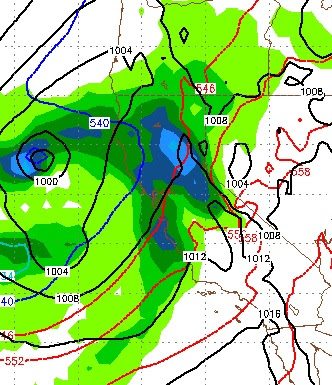 The storm track for our latest weather system has shifted north and Tahoe is now right in the bullseye of the storm. This is a major storm for this time of year and will last through most of Saturday with high winds and lots of precip, mostly snow above 7,000 and perhaps lower. Most of the major precip should be over by late Saturday afternoon. However, we are talking about a lot of rain and mountain snow between now and then. The possibility exists for a major snow event for the leeward foothills around 5,500 feet and above as the NWS is having difficulty pinpointing snow levels with this very unusual storm. If you live in one of those areas, be prepared. The next storm we are tracking comes in next Wednesday, April 12th. This looks like an abnormally large spring storm again: This storm has adequate moisture and will come in warm we believe right now. Our best guess is 7,500 feet. This system will stick around until late Friday afternoon. We are tracking another abnormall
Post a Comment
Read more

Time for the Something Decent; Huntington see's Wet April 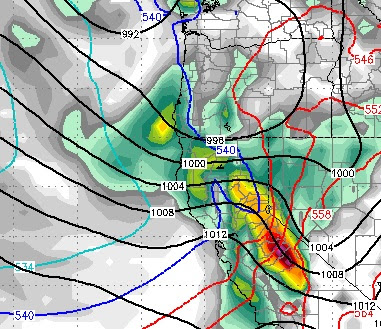 If you read the last post, we are now approaching what we termed a decent storm. Here are the details: Approaching storm will mean above average temps tomorrow as storm's counter clockwise rotation brings in sub-tropical air. Thursday starts out warm, but as storm approaches, temperatures begin to drop and winds begin to increase, especially Thursday afternoon. Very early Friday approaching storm reaches Sierra and has a very adequate moisture tap. Moisture should be moderate to heavy through Saturday as this storm is moving much slower than the last series of storms. Storm could produce as much as 10 inches of liquid precip at the Sierra Crest South around Mammoth and up to 5 inches in the Carson Range. That classifies this as a very strong spring storm. Here is a look at the GFS forecast for late Friday night as the storm peaks around then: Here is a look at the total precip. Some areas of the Central Sierra could pick up 10+ inches of liquid precip, which would
Post a Comment
Read more
More posts