August 04, 2018
It used to be that if California wanted to ruin itself, it's resources, it's people and it's land, then let them. For many decades we have watched Californians do wrong. Hey, that's their business. Since the left has taken over California, we have watched nearly every decision made, be made based on politics and not on what is right or wrong. The end result is that California is the laughing stock of the world and an example of human idiocy that has not been seen before. Californians are migrating east at an alarming rate, changing the politics of states like Nevada, Arizona, Colorado, Oregon and Washington. Bolstering big government because the government is our only hope to save us from human indecency. Can we classify a new disease; Californiaitis?

Oops, sorry for the delay in writing this. You see my office is powered by a mobile solar station that I built a few years ago. But that just died and I lost power. So I had to plug everything back into the grid. You see, there is so much smoke in the air, that the sun cannot penetrate and my system is running at 4% efficiency, which is not enough to power the office.

Our smoke at the beginning of the week was coming from Redding to our north. We had a one day reprieve as our winds shifted to the south. Now most of the smoke is from the Yosemite fires. Folks, we are surrounded: 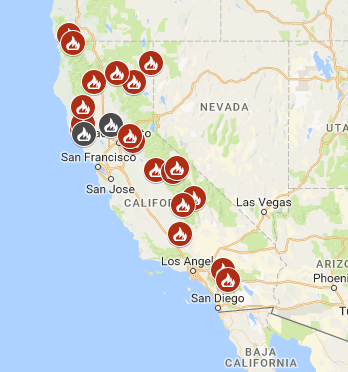 Since the early 1970's, California's let it grow policy has turned once pristine forest land into a mess of tinder overgrowth that has been building up to an unsustainable level. Why is it California only has these fire issues? Sure other state's have fire, but California seems to burn all summer and fall these days. The list of wildlife that can be saved by pulling logging contracts is very long. It is also total BS pushed through by wealthy trust funders who don't know their ass from a hole in the ground. We need the winds to shift from the east and north, so the highly toxic smoke that we are being forced to breath, can pollute areas like San Francisco and Los Angeles.

Here is a simple concept; if you are going to allow people to place their homes in heavily forested areas, causing us to have to put out fires as they start, then you must balance nature in other ways since we won't let her balance herself. Logging, or lack thereof is both problem and solution.


“Our forests are dramatically overcrowded,” LHC project manager Krystal Beckham told The Washington Examiner.
“There are some places where there may be four times as many trees as there should be,” Beckham said. “When you have trees that close together, they can’t get the water they need, so they are more susceptible to drought, insects, and disease. And when they start dying, they become a terrible fire threat.”

If you want to know the extent of forest mismanagement in California, Google this and you will get 432,000 articles. This is not something new, it has been going on for decades and we have been aware of it for decades.

Finally, if you read our posts this spring we predicted a terrible fire season. Many are trying to blame Global Warming for this. However, the inverse relationship between water during the rainy season and fire during the dry season is a proven fact. We had so much rain and snow this spring, that grasses again grew out of control. When the dry season kicks in, those same grasses dry. They become fire starter fuel. Couple that with all the overgrowth in the forests and the net result is very predictable.

What is the solution? Dumb question, get rid of the politics and politicians mismanaging the California forest land. The problem is this; it took 5 decades of abuse before we are seeing the consequences of California Idiocy. It will take another 5 decades to solve the problem. Or put another way, if we start properly managing our forests today, things will get better by 2070!

In the meantime, places like Reno and Carson City, Nevada, could become nearly uninhabitable during the summer and fall months.They are border lining on that today. Folks, you are not just breathing in smoke from wood, thousands of structures have been decimated and the toxic chemicals used as building materials and that all people store in their homes  and businesses went up in smoke and you are breathing it each time you go outside.

How about the Lake Tahoe economy? Would you return to Lake Tahoe or Reno for vacation after spending a week indoors because you cannot go outdoors? We are on week 7 of this with no end in sight so if you think this is just a minor inconvenience, think again! Keep Tahoe Blue? Good luck on that one.