November 18, 2019
We have a very weak and dry system dropping down off the NW Coast of the US. It will pick up moisture from another weak system that will move in over Southern California. The northern system will drop temperatures, significantly. There is a slight chance of very light snow for the leeward Sierra. 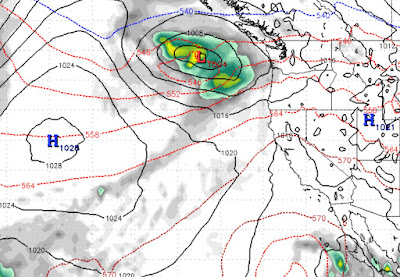 The major culprit for our dry weather, is that high pressure system off the west coast. That system has moved out a bit and allowed a nice alleyway for that Low to the north to drop down. But the High is very large and will force that low inland, way too soon. It will make it's way down to our area, but has no moisture tap to speak of. Our moisture will come in from the east so this will be an Eastern Sierra event. It is getting what little moisture it can from another Low Pressure system from the south: 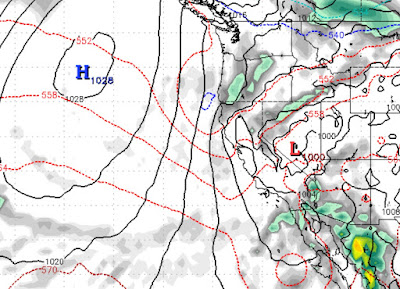 This weak system is really nothing but another cold slider, which can be great with a 10 foot base, but this will do little if any good. Mt. Rose could pick up a couple inches of snow, but not the real wet base making snow as snow levels will start at 7,000 feet and drop to 5,000 feet. It could help the tireless workers at Rose to fill in the gaps and perhaps get NW or Lakeview spinning. Sven over at Unofficial Rose will let you know all about this. There is a very interesting post on why the dry October and November weather as well.

If you take a closer look at the map above, you will undoubtedly notice the enormous area of high pressure off the entire US West Coast. That will dominate our weather for at least the next 1-2 weeks allowing little if any precip into our area.

Pattern Change for Early December?
Okay, we are seeing a light at the end of the tunnel. Toward the end of November or early December, the long range models are showing a series of storms that could bring some much needed snow to the area. Snow we measure in Feet.

We are going to show you a few forecasts. These are long range forecasts so take them with a grain of salt. The following is a storm that could slam Tahoe in the first week of December: 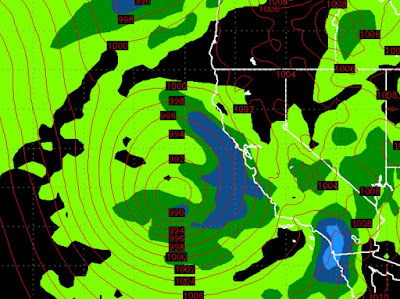 :
That blocking area of high pressure is gone! Cross your fingers. The next chart shows the precip forecast for the next month: 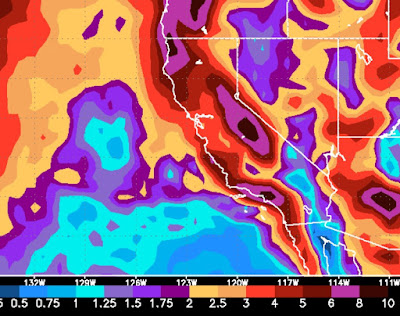 This is the first time this season we have seen anything like this.