January 08, 2013
Happy New Year. As I mentioned in my last post, things were going to dry out and they have. I very strong ridge of high pressure has camped out over Tahoe and brought extreme inversions to the area with very poor air quality in the leeward valley's of the Carson Range.

Short Term
That should finally mix out as a very cold Low Pressure system is going to drop into our area and bring with it very strong winds, warm air ahead of the front and very cold air behind the front. As the valley's finally mix out of the cold and dirty air tomorrow afternoon, high temps will reach the 50's and possibly 60's as this front pulls up warm air from the south.

That will be short lived. Unfortunately this storm is somewhat moisture starved. As the cold front approaches snow levels will reach the valley floors and I expect 6-18 inches in the Sierra above 7,000 feet. Lesser amounts at Lake Level. We are looking at less than an inch of liquid precipitation with few exceptions throughout the Tahoe Sierra. However, because this storm will rapidly usher in very cold air, the ratios should be in the 15/20 to 1 range. Here is the EC Look at total precip: 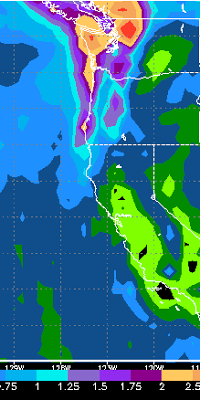 Because this storm is moving out of the north and bringing very cold air, there does exist a chance for Lake Effect snow on the south shore of Tahoe and other Large Lakes. However, the NWS is reluctant to mention that in their official forecast. Not much more I can say about this storm, except it is better than nothing.

Long Term
Here at the TWB we like to look way out and see what the models are dreaming about. In my last post I talked about conditions ripening again around the 20th of January. That is still 12 days out, but right now that looks like it may be too ambitious. I think our best chance of a significant weather pattern change is around the 25th of January to the 1st of February. EC's long range is seeing something in this time frame that could produce the types of storms we get excited about. Here is a look at total precip from now through the 3rd of February: 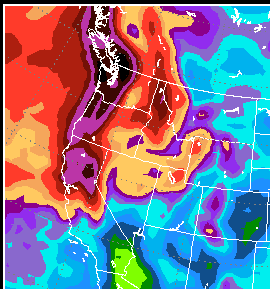 I did not include the scale with the above image, but EC has all of Tahoe picking up 8-10 inches of liquid precip starting around the 25th of January and really picking up at the end of the month.

Of course things can change, but I wanted to give my loyal readers something to hope for.

El Nino
Well the forecasters at NOAA have all but ruled out El Nino for this winter. I have not. Mostly because we were in a weak El Nino for most of November. The call it the winter of 2012/2013. Which makes you wonder how they rule it out when we are already in one?? I think they meant for 2013.
We are in a solid neutral ENSO right now, which should bode well for the coming months.