Large, Warm, Windy and Wet, Knocking on the Door

October 12, 2016
For a synopsis of this storm system, which is now two storm systems, see our last post.

In the meantime, not much has changed. A couple of very large storm systems will be having a major effect on Tahoe weather over the next 5-6 days. These storms are packing major winds, especially Thursday night through Friday morning and then again Saturday afternoon.

They are also packing epic moisture. Not many outlets are talking about the moisture potential. Here is the ECMWF forecast for moisture through Wednesday: 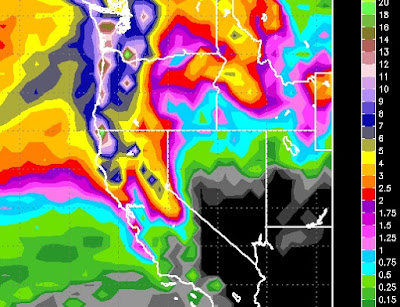 The only change is the heaviest moisture will be to our north and west now. However, I still see major moisture for most of the Sierra around Tahoe and Carson range.

These are very warm storms and unfortunately snow levels are going to start out at around 10,000 feet. So only the highest peaks of the Carson Range will see all snow. Eventually snow levels will drop, but rise again as each moisture plume approaches. Amazingly, areas around the California/Oregon border are being forecast to pick up 20 inches of liquid precip!

For now, I am adjusting down my snowfall predictions. Most areas around Tahoe will see mostly rain. Mt. Rose, could pick up a 2-4 feet of very wet snow, but that is by no means certain as these are very warm storms being fed by an atmospheric river event of warm moist air.

Of course the upside is that the northern 1/4 of California will be picking up record moisture for this time of year and significant moisture will spread into the upper half of the state.

I see as much as 3 inches of rainfall for the leeward foothills of Reno and Carson City.

As of now, it looks like high pressure will move in about the middle of next week for at least a 3-5 day period.