February 27, 2019
Imagine: No Blower Trucks, No 4 Wheel Drive and No Weather Forecasting computer models. In 1846, we hit a similar weather pattern where it literally snowed for 2 straight months, starting in late October! The rest is history and we now have Donner pass and Donner lake to commemorate the 39 lost souls in the Sierra who attempted to cross the pass and were caught by an early and unforgiving winter.

Folks, this is the snow belt and we should not be surprised by anything Ma Nature throws our way. What is a bit surprising is our record breaking winter, just 2 years ago, looks like it may fall by the wayside. I say that because we are tracking 3 more major winter storms in the next 10 days that will continue to dump copious amounts of snow on the Sierra. Remember, we had a very slow start to the season and we even heard complaints about our above average snowfall prediction. To which we replied, "Just Wait".

Now 2 months later there are areas of the Sierra that will have picked up 60 feet of snow in just 60 days. For those of you who live in the Sierra, you may want to start building an Ark, because this seems biblical.

The current storm is nearly over and we will see a very short break. Then very early Saturday morning the next storm shows up: 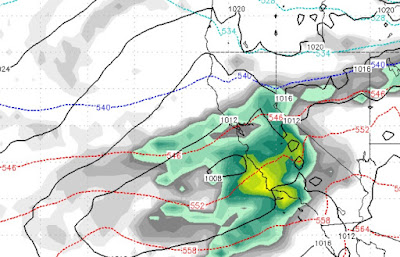 Although this storm has a decent moisture tap, the bulk will slam the central Sierra, although we will still pick up our fair share. This storm will move through relatively fast. This storm will pretty much be a Saturday event, then our next short break will last from Sunday March 3rd through Tuesday March 5th.

Perhaps the storm machine needs to catch it's breath, because late Tuesday or early Wednesday a massive storm moves in from the south: 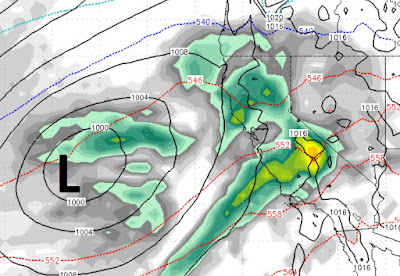 Right now we think this storm will hit California and slam on the brakes. The next storm will bump it forward but there will be little or no break in the precip. Here is a look at the forecast for very late Friday March 8th, you can see the storm is not letting up. 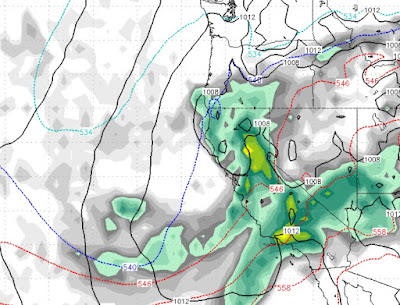 These southern storms will have wide variations in snow levels because of the mixture of warm and cold air. We believe snow levels should average below lake level for all the storms. So if you live in Tahoe, you have much more snow coming your way.

So, in the next 10 days here is the liquid precip forecast, multiply that by 10-14 for a pretty accurate snowfall forecast: 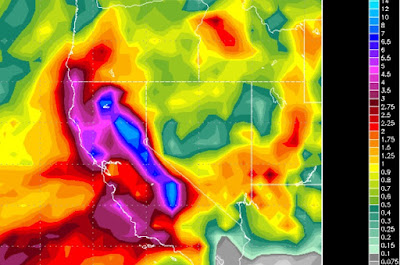 Looking way down the road, we see several more storms heading our way until we finally see a break around the 22nd of March. The storms from 8th of March through the 22nd of March should be weaker as we move later into the rainy season.

We have said this the last several years and I think it bears with repeating. All this moisture is going to give California one of the greenest springs in history. However, when we transition from the rainy season into the dry season that green will turn to brown and be used to ignite another very violent fire season, unfortunately that is just natures way.