January 16, 2012
Update
The timing and precip amounts that I talked about yesterday remain right on as of this morning's model runs with the possible exception of the Friday/Saturday storm bringing more precipitation. Snow levels are the concern here and remain so. Looking at things right now, it appears as though the Thursday storm will start cool and then a warm air overflow will bring snow levels up. The thinking now is everything above 8,000 feet will be all snow.

The large storm set for Friday/Saturday is becoming even more impressive. The west to east trajectory will allow this storm to pick up copious amounts of moisture. The latest GFS run has this storm dropping 6 inches of liquid precip over the crest all in the form of snow. It looks like snow levels for this storm will be around 7,000-8,000 feet as well.

The storm that I had slated for the following Tuesday, looks like it could show up a little earlier. I will talk more about that one when it gets closer but suffice it to say, it looks like a decent sized storm as well. This will be a much cooler storm and snow levels could well be at the valley floor level.

Valley Rain
Most of the precip in the valley's will be rain. However, I expect a fair amount of rain, which we need. By this time next week, Reno may well have picked up 3-6 inches of rain and the foothills even more. The timing for the last storm could be a week from today and that could bring snow to the valley, however that is too early to call.

Long Range
I do not want to get too far ahead of myself, but ... take a look at the chart for Friday of this week. This is a near perfect scenario for stormy weather in our area. To the north and east we have a wall of high pressure that is blocking everything. To the south and west we have the very strong ridge of high pressure that kept us dry for so long. In between we have a storm alley that is moving from the Northwest to the Southeast. That allows the storms to pick up large amounts of moisture. We also have a large area of arctic air to the north and east fueling the entire process. 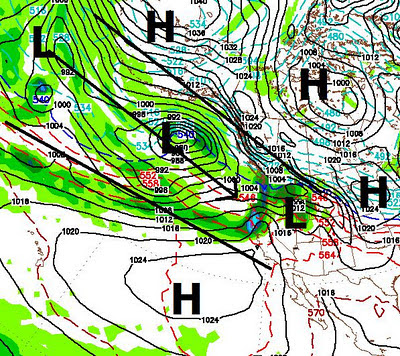 Looking out a couple of weeks, this pattern for the most part appears to be staying in tact. That should mean more weather similar to this with the chance of some very large, wet storms. I know we are way behind on the precip charts for this year, however it does look like winter is coming to Tahoe with a vengeance.