January 21, 2018
We have one real storm and another storm that will break up around the time it hits land. After that, a coastal ridge of high pressure will move over us for at least a week and probably more.

There will be a disturbance that will move in tonight. As this disturbance moves inland and hits the Sierra, it will break up and probably will amount to 1-3 inches of snow, during the day tomorrow, at best in the Carson Range.

The next system looks much better but is still not what we would consider a big Sierra storm. This storm will be colder, snow levels to start at 6,500 feet and drop quickly. However, like last storm, this is a fast moving disturbance which will limit the amount of snow it brings to the Sierra. Here is the forecast for Wednesday afternoon: 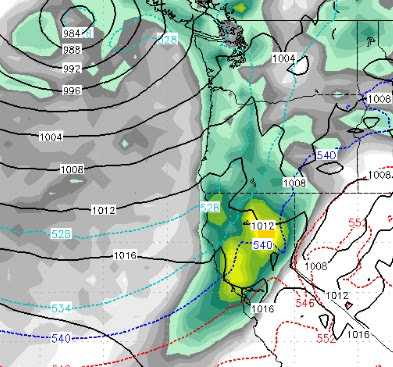 This thing will be mostly gone by noon on Thursday. It does have some moisture to work with and I look for 8-16 inches of snow for the Carson Range and a bit more for the Sierra Crest.

After that, high pressure moves in and camps just off the coast. That will begin a warming trend next Friday that will last about a week with valley high's perhaps reaching 60.

We are tracking another possible storm cycle that could start in the first week of February.