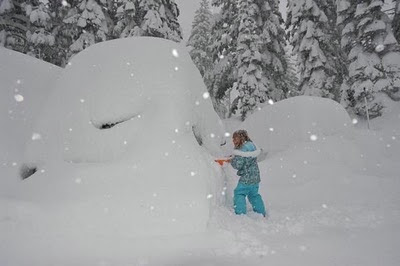 The above image is a girl, this week, trying to dig out her car at Mammoth, with what appears to be an ice scraper. A good friend sent me this image and it gives you an idea of just how much snow has fallen in the Sierra. This picture could play out anywhere from the Central to Northern Sierra as snow could be measured accurately in yards!

Weather Moving Forward a bit Sketchy
What will the weather be like moving forward? There are currently two schools. The first school is the NWS and the local meteorologists. They believe that things are going to eventually wind down and we will return to some normalcy. The storms I have been warning about around Christmas and New Years are not of particular concern right now. They believe that the pineapple express has moved significantly south and will eventually move out of the area. Take a look at the satellite, which appears to support their argument: 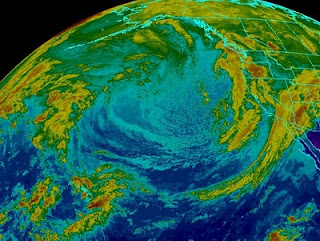 The other school is the weather models, NOAA and Myself. There is a very large storm forming up in the Bering Sea. There are still large amounts of moisture sitting out in the Central Pacific that are not yet associated with this Pineapple express. This storm will begin to move south down the coast. It should start to affect our weather late on Christmas day. Here is what GFS thinks about 10:00 am on Christmas day: 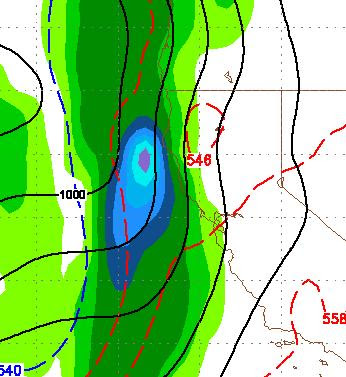 The storm is actually still well north of us on Christmas. As it moves down the coast it will tap into the sub tropical jet and move copious amounts of moisture on shore and into the Sierra.This will happen around the 30th of December. Take a look at GFS for midday on the 30th: 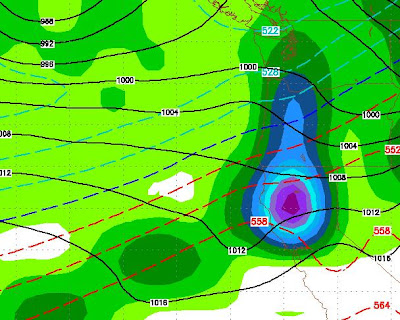 This will usher in a series of storms, similar to what we have seen over the last week. Those storms could last well into the first week of January.

I am reasonably certain of this weather event, because more than 1 model is leaning in this direction. When that happens I like to confirm things with the PNA chart supplied by NOAA. Take a look:

This chart continues to stay negative which would suggest that our weather is not going to change a whole lot. The moisture tap at this time does not look as big as what we have seen, however, suffice it to say, our stormy weather should continue into the foreseeable future.
Disclaimer
Predicting weather 3 weeks in advance is something only an amateur would do. That's ok, I am only an amateur.