Next Storm Should Hit Late Tonight

March 31, 2014
The 3rd storm in the last week is approaching as I write this and should hit late tonight. This will not be as big as the storm we saw on Saturday and very early Sunday, but will leave more preicip especially west of the crest and south of Lake Tahoe. Here is a look at the forecast for late tonight: 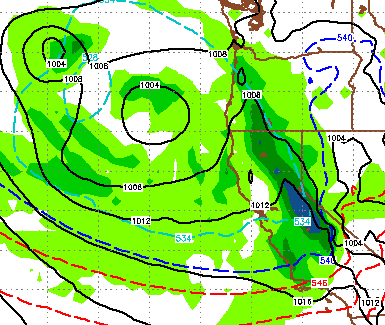 This storm is also going to slide down the crest. Like the last storm, the Carson range could get shadowed out. Amazing the difference in precip between the crest of the Sierra and the Carson range. Sugar Bowl reported 5 feet of snow, while Mt. Rose got around a foot. I drove over the Donner Summit yesterday and it was pretty amazing the amount of snow they picked up in 36 hours. By the time we got to Truckee there was just a minor amount. When forecasting the weather, it is really hard to predict the rain shadow anomaly. Suffice it to say, very beneficial rains fell west of the crest in both the northern and central Sierra. I would expect more of the same with this storm to a lesser degree. I am a little shell shy for the Carson range, but I would expect an additional 6 inches to fall and maybe more if the trajectory of this storm comes from the Northwest and not due West. I expect 1-2 feet by late Tuesday for areas like Sugar Bowl and Squaw Valley. Possibly more for Heavenly and Kirkwood.

Another system comes in on Thursday. This system, currently, will not have the moisture to work with, but as we have seen, that can change.