March 05, 2014
We have been talking about this storm for over a week now. The timing has not changed as this storm will drop into our ares from the north and west. It will tap into the very warm and moist air out int he Pacific and bring some rain to the Sierra below 9,000 feet to start with. As the front moves through those snow levels will drop to around 7,500 feet. This storm is fast moving and should drop around a foot of snow around the upper elevations of the Sierra Crest west of Lake Tahoe. About half that in the Carson Range (as usual). Here is a look at the forecast, notice the approaching storm, this should be late tonight: 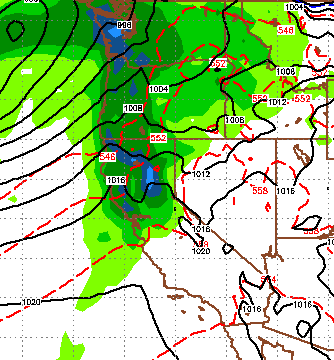 Snow should last through the morning tomorrow and the afternoon ... however at elevation, which is going to be very high for this storm. Most resorts over on the west side, that are challenged for elevation will receive all rain.

We have also been talking about another storm in the series for Sunday and Monday. Here is a look at very late on Sunday night: 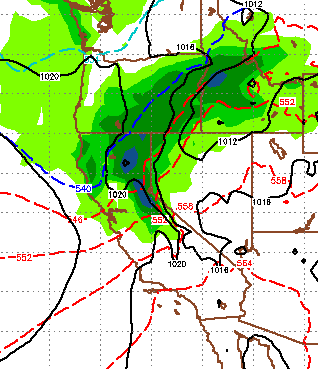 The so called experts are calling for this storm to pass us by, but I believe it will hit and have about the same effect on us as the storm tonight and tomorrow, albeit with slightly lower snow levels.

Of course, all this moisture is very beneficial for Northern California which is beginning to catch up to the its average ... albeit we have a long way to go.

After this, we are going to move into a week of dry weather before the machine cranks up again.