December 12, 2015
A very cold storm is knocking on the door. It will bring high winds to the party as well. In fact when you wake up tomorrow morning, there is a very good chance the lifts at Mt. Rose will be closed as slide mountain could be seeing Category 4 Hurricane winds (130 mph).

Right now, it looks like the snowfall will be intense but short lived. Here is a look at the forecast for tomorrow starting at around noon and lasting into the evening. There will be some shadowing effect, which will slightly limit the amount of snow in the Carson Range: 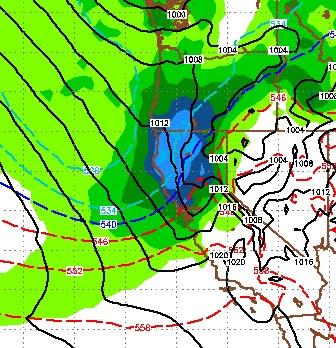 This system has a very adequate moisture tap, however there are no inland systems to act as a blocking force so it will quickly move through our area. By around 6:00 in the evening here is what it should look like: 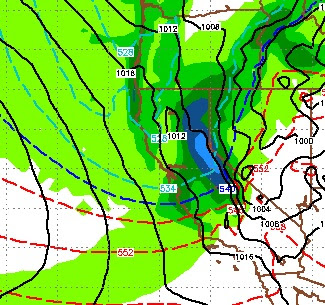 Finally, here is what the EC model see's in the way of total precip for this storm: 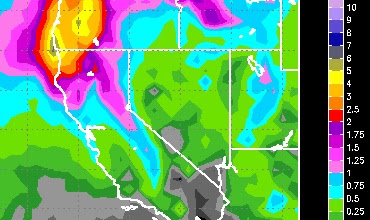 Snow levels will start at around 6,000 feet. This will be all snow for all of Tahoe. The western shore ski areas will get the most snow out of this system. However, I do believe the Carson range will pick up an addition 10-18 inches. Remember, this is a much colder system so the snow to water ratio could be in the 14 to 1 range.

I am starting to see signs that El Nino may begin to influence our weather. Thus far, we have had what I consider to be average storms for our area. They are born in the Gulf of Alaska and move down the coast. The short waves that we receive are splits from the main system that pick up sub tropical moisture. This has been an average year ... thus far.

Looking down the road, the long awaited westerlies may finally be arriving. We are looking at about 7-10 days of dry weather then a storm that was born on the other side of the pacific will strengthen and come in through Southern California. That is the El Nino influence that we have been looking for. I do not want to get too far ahead of myself, but one of my researchers believes this could usher in the beginning of El Nino and could be packing a storm that is capable of 6-9 feet of snow for the Sierra, his words not mine. I am not there yet, but take a look at the forecast for around the 20th of this month, notice the storm off the So Cal coast: 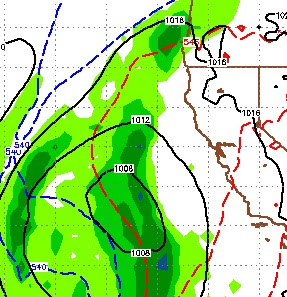 This thing is going to spin up, strengthen and have an effect on our weather. How much of an effect remains the question.

Fantasy Forecast
The models are picking up on this phenomenon. Take a look at the 30 day, it bodes well for Tahoe: 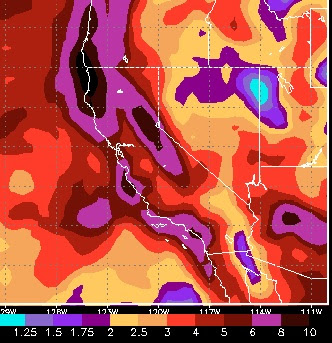 Most of our area is in the 8-10 inch precip forecast. Remember, just a fantasy, but back by popular demand ... see we listen.