January 22, 2016
Another storm is knocking on the door. This storm has a very adequate moisture tap but nothing inland to slow its progress. Therefore it will move in and out relatively quick. Look for 1-2 feet of fresh snow in the Carson Range. Along the Sierra Crest, west of Lake Tahoe, look for 2-3 feet. Most of this snow will fall late this afternoon through the early morning hours of tomorrow. Very strong winds are accompanying this storm. I believe the Summit lifts at Rose will remain closed through the day today, but should be open tomorrow morning.

The storm that everybody is watching is moving toward us as we speak. This storm will tap into tropical moisture, gain in strength and bring lots of precip. The only question is where? Right now we are at the southern tip of the storm. Some El Nino, bringing most of the precip north of Tahoe and north of California. Most El Nino's are very dry for the Pacific NW, not this one, at least not yet. We are still waiting for the much needed rains to begin to hit Southern California.

Here is a look at that storm as it approaches 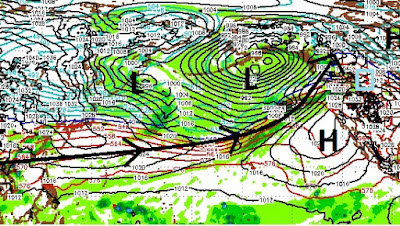 This is the type of storm that we have been concerned about. This is a large storm that has tapped into tropical moisture. It will be a very warm storm. If its trajectory moves south, snow levels will be quite high. This behemoth also will have strong blocking system inland over Thunder Bay to the Northern US Plains.

Right now, my best guess is that this storm will move south and have a significant impact on our weather. I say this because a large blocking high pressure system will be in place to alter the trajectory of this storm pushing it further south than the models are predicting.

As it gets closer, we will get a better read on snow levels. This is the type of storm that could be bring as much as 10 feet of snow to the highest elevations or it could bring heavy rain as high as 9,000-10,000 feet. However, again, these storms have been tough to read so we will see over the next week as anything can happen.